Sean is one of our fans and followers. He invited us a long time ago to visit him once we were in Minnesota and so we invaded his home. Since the weather had been rather lousy the last days, we took “all” what he offered us i.e. a place in his garage and a room to sleep in. The first evening we devoured vegan pizza. The pizza company screwed up and brought a wrong one. What a disappointment, but the good thing was that we had now two vegan 20” pizza. Heaven!
Thank you very very much Sean for hosting us so well. You were really kind and helpful and besides that your couch was extremely comfortable. Say Hi to Duke!
The days went by quickly. The bikes needed some regular maintenance and minor things at the GS such as the oil inlet, one of the fuel line couplers and Suzi's mirror needed some fixing. Skippy made another travelogue and we sorted some more photos. Routine work for us.

We found some good grocery stores and enjoyed delicious vegan ice cream in the warm and sunny weather. Skippy got her long desired tattoo, I visited the miniature train museum and otherwise we took it easy. Just besides Wholefoods was Grandview Cinema and they were showing the movie Tammy - a comedy by Melissa McCarthy. Since girls could stay at Sean's place we went to see the movie, it was entertaining.

And then I went to the railroad museum... 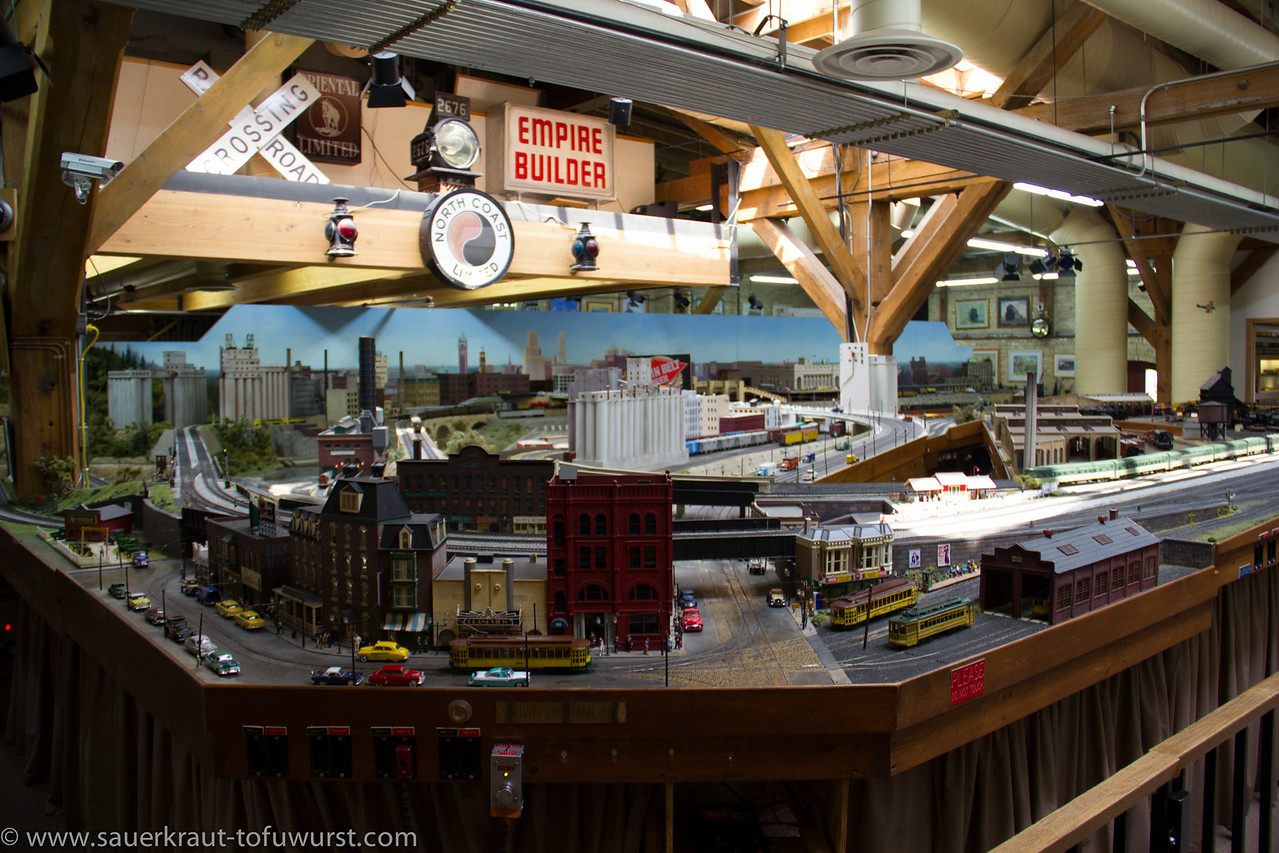 I checked out what else one can do in Saint Paul and found by pure luck that the BMW club had its BMW MOA 2014 rally in St. Paul the following weekend. I was all excited. Our first rally in the US, plenty of Beemers and the fully packed program sounded promising.

Sean let us stay a few days more and as we were enjoying life, Skippy got a message from her tattooer in which he asked whether we were still in town. After some back and forth, Skippy got a great deal. He offered her another tattoo for free and in addition gave her his new invention for practicing Ukulele – Chadderboxx. In return she would take nice shots around the world with this instrument. Well done Skippy!

On Thursday we packed our stuff and rode to the rally. Almost 6000 people attended the rally at the Minnesota State Fair Ground. It was enormous for our taste. Beemers everywhere, spiced up with a few V-Stroms, some Harleys and I saw some KTMs as well. The tents were spread over the entire fair ground and so there was quite some traffic going around. One could show off one's bike by going to the MOA stand, to the showers, to the bar and so on... you got the idea :D

I searched for a place and found one with some shade, whereas Skippy went straight to the morning Yoga. We participated in the awards competition and we got the first place for World Tour, followed tightly by two Australians. The award ceremony was somewhat sad. Maybe some 20 – 30 people were standing in front of the award booth and awaiting the judgement. Most of the prices were not picked up. Well the most non-flattening award in my opinion was oldest female rider and she came to get her trophy!

In contrary to the award ceremony, the price drawing at the closing ceremony was a huge event. Almost full house. This huge contrast between the non-monetary award ceremony and the closing ceremony with its high-value prices was somewhat disturbing and disappointing. Of course we would also hope to win something and finance our journey. It appeared to me to be more about getting a price in return for the entrance ticket instead of honoring people who came from far away or had quite some age. Respect and congrats to all award winners!

During those days we met many new great people and we also got to meet a fan and follower – Hello Colleen and greetings to California!

Before we went to the rally we had a brainstorming session at Sean's place on how we could use this rally to do some fund raising to support our efforts towards a cruelty-free world. We had some great ideas and then Sean nailed it by finding and giving us an old treasure box. Idea realized and screwed onto the sidecase. Perfect spot and we quickly added a few signs and a message. By the end of the rally we got 15 USD and 3 CAD. Thank you Sean for this treasure box and thank you very much to our dear anonymous supporters! We really appreciated your contributions.

It was interesting to see various different sidecars. One thing they all had in common was that they did not have a swing fork in the front but managed with modified Telelever or similar. Our sidecar was causing some attention, many people stopped and we had a chat about our RTW tour. Even Skippy's Pussy Ride found some admirers. As so often before, Ulpu was the everyone's favorite and even a tiny walk passing by bikes took quite some time with all the petting and small-talk. And then it was Sunday, the rally was over and for us it was time to ride again.


Click here if you have trouble to watch the video.