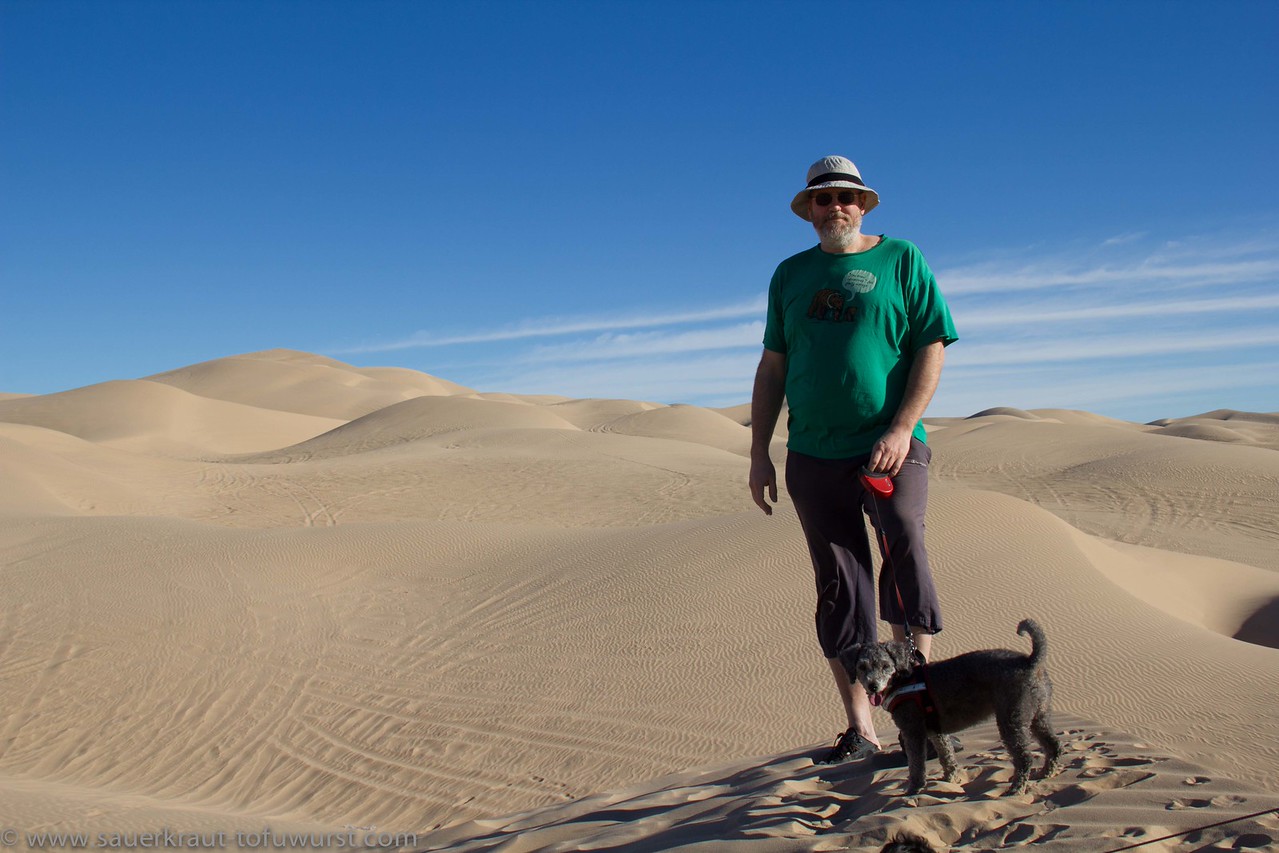 Posted by Sauerkraut & Tofuwurst at 18:49 No comments:

Our ride from Las Vegas to Lake Havasu brought us once more into the solitude of a desert. There was not much to see compared to what we saw already and the road was as straight as it could be just going up and down the lifted elevations (would not call those hills). Once more we also tried to escape the snow which was announced to fall on Las Vegas in a few days. Course South it was then.

We changed our original plan to go back to Death Valley for the New Year because my rear shock was still not fixed and Skippy did not wanted to get stranded again there :D
Now one must admit that I do listen to Skippy. If it would have not been her pushing me I would have gone back to Death Valley – what could possibly go wrong this time?

We checked in at Motel 6 in Lake Havasu, our room was a closet and the bed would be just fine for me ... alone. Luckily we could change the room the following day to something bigger with two beds, at least that guaranteed I got some sleep (Skippy does snore!).

The snow finally caught us in Lake Havasu and the temperature was -2C in the night (I checked Helsinki and they had same temperatures over there .... why did we come to Arizona????).
We entered 2015 without even noticing it. Somehow our travel changed our perspectives to New Year very much. In Finland 2015 already started many hours ago and the first just woke up from their hang-over, folks in New York toasted HNY two hours ago and 500m from our motel to the East – just across Colorado River – there was California and they would still need to wait for one hour to do the same. That was too awkward and so we focused on our little time bubble and watched another episode of Castle from our laptop :)
I felt that I had been too long in the motel and it was time for another ride. Since Skippy already drove a few kilometers of the Route 66 it was now my turn. My plan was to make a day ride from Lake Havasu via Oatman to Kingman and back to Lake Havasu. A peaceful ride on paved roads (my rear shock was still leaking a bit, thus no gravel this time).

The sun was shining, the sky was blue and the temperature was manageable (+8C or so). Oatman appeared to be full in tourist mode. Plenty of gift shops advertising their stuff and cars parked all over. The main road was blocked by cars and I heard from some other folks that they just had a “shoot out” there :D

Yeah - I did hear some shots from far away. As I waited for the street to clear, I admired those burros going back and forth all over the village and coming to people's car as soon as they saw a hand ... there might be some food. Some kiosk even sold burro food. Maybe not the smartest choice?

A few miles later the road was closed ... WTF? Why would the road be closed? No info of why anywhere! All cars but one made a U-turn or took the gravel road to Boulder City. The purpose of my ride was to ride along Route 66 or at least the Byway. Taking such a detour made no sense. Thus the only choice was to keep on riding passed the “road closed” sign and following the one truck which kindly ignored the sign as well.

After a short while there was a segment where half of the street was covered in snow and ice. That might have been the reason for the closure or it was the consequence of it. A mile later I saw a bunch of guys, asked them and they confirmed that snow and ice was the reason for the closure. USA! What would Finland be if roads would be closed during the 6 months of winter? I even still had a winter tire mounted on the back :D
Of course I went and it was all fine. No worries at all – maybe in the night when it is dark it might be a different story.

The road was real fun and soon I reached the other road closure sign. After that it was all open and straight letting me reach Kingman in no time. Mission accomplished!
Already for a few weeks I got more and more restless and some inner voice in me (and Skippy) told me that it was time to move on. Looking at the things we still wanted to see and do in Canada and USA, taking into account what we experienced so far, looking at our financial situation, calculating distances and costs we both had the same feeling: it was time to head south and experience Central and South America!

Skippy had energy to make another travelogue. Welcome to our reality show :D

Posted by Sauerkraut & Tofuwurst at 06:53 No comments: