21. - 30. of May we spent in the sidecar place in Brodersby near Kappeln. Wolfi was busy with his bike stuff so I had finally a good chance to practice with the local karate club. In this period of time I managed to enjoy 5 different kinds of trainings. I had plenty of fun, learned a lot (also in language wise) and in the end couldn't walk properly anymore!

The very first training took place in Gettorf and was a kind of rehearsal for Dan-examination.... and I was instantly in a shock! Back in Finland I already had a small hunch that things in German wadoryu karate are a bit different, but never realized that the requirements for 1st Dan are SO different! So about in the middle part of the training one 1st Dan -guy came to ask me that do I actually have 1st or 2nd Dan!!! (the color in my brown belt is a bit worn out...) Soon after that moment I learned that what is needed to know in Finland for 1st Dan comes in Germany from 2nd to 4th Dan! This really gave me mixed feelings because I had a plan to hopefully finally get my first Dan in Germany (I ran out of time in Finland), but now I'm not sure how to feel about these differences...

Saturday 25th of May I had a great opportunity to take part in one day Kata-seminar in Kappeln by Barbara Pellegrini 5th Dan and Khanh Hoang 4th Dan. I think both have a very nice peaceful and consistent way of teaching and they also speak 'normal' easy to understand German :) So I can highly recommend to go to their seminars if someone has a chance! Only funny thing was (rather normal though...) that in some parts of the katas we went through (e.g. the very end of Seishan) they have totally different views, so first Pellegrini taught one way and soon after that Hoang came to correct with her way... Luckily I'm rather quick in adapting these sort of things so in the end according to the sensei who was in front of me I did techniques in her style and always got comments like "Super!" :) In the dressing room I got also nice comments from Pellegrini, who said that my karate looks excellent and I'm very precise with my techniques. I was extremely happy about her comments, because I can honestly respect her opinions and her way of teaching! It was also good to have a small chat with her because she happens to be one of those senseis who grade the Dan-examinations and it's always good that they have at least a small impression of you before you take part to the exam.

Next week Monday, Tuesday and Thursday I was having plenty of fun in the normal trainings of Tokaido Kappeln. Trainings always started with basketball with karate rules! ;) After that we had plenty of skipping rope exercises, which I'm not too used to and my calves were stone hard for a week! Then plenty of different kind of basic and partner techniques and I finally got a good picture of what is needed to know in Germany for 1st Dan. Well, much less than in Finland (especially with katas and Ohyo/Kihon kumite) and the Renraku waza's you can choose freely and then they have some Uchi waza's which don't exist in Finland. Nothing too difficult though, so I should be able to learn them before September... 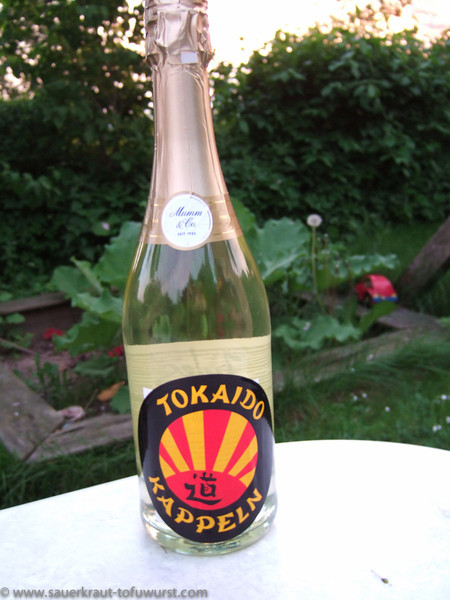 At the end of Thursdays training I got a bottle of sparkling wine as a farewell gift from the Tokaido club sensei Werner Wilhelmsen. Very nice and polite surprise. Thanks again, we enjoyed it a lot! :) When I left the place I also found this glued to my right sidecase... Very brave men, I must say! Luckily I was in a VERY good mood! :D

Today (June 9th) I heard that Wilhelmsen had made me officially the member of German karate federation and that I will also get German karate passport. Wow, didn't realize that these things have to be so official here! Somehow thought it would be enough to belong to one club in one country (eg. Finland), but I'm extremely happy that he took my wish to try to get black belt in Germany seriously and made all these efforts for me! Huge thanks!!! So most likely at some point in the fall (September-November) when we come back to middle Europe I will have some nasty sweaty and panicky moments at some dojo in Germany... :D

Posted by Sauerkraut & Tofuwurst at 01:04

Email ThisBlogThis!Share to TwitterShare to FacebookShare to Pinterest
Labels: Karate