One of the things to pay attention to when traveling with dogs was (and is) to observe what they "collect". We already did some flea cure in a previous motel and it seemed not enough. Another measure was to shave their fur off and this was what Skippy did: girls went back to summer-fur. After the shave Lyra was once more a few hundred grams lighter, so thick fur she grew the past months :D
No more fleas after that :)

Skippy had some stomach/headache problems and thus did not feel well enough for riding. Since it rained again heavily the next day we ended up staying 3 nights in Fort Bragg before we rode towards south.
The ride to San Francisco became the spookiest day on our journey as of that moment. We rode on the very curvy Hwy 1 and Skippy was much faster compared to me with my sidecar and gentlemen as I am I let her go first. Clear instructions: Always follow Highway 1. The tricky part on the road was that sometimes Hwy 1 made a turn whereas the “big” road went straight and became at the same junction a different highway. Obviously Skippy must have missed a turn whereas I saw it, turned and we went different ways.

Skippy had no phone, no map, maybe some money and her excellent "attitude". She waited for me in the next village and I waited for her along the road. As none of the other showed up I continued, waited some more and continued, waited some more and continued . The last part of the road was really foggy and sometimes even hard to see where the road goes. Parts of the street had signs left of some fresh flooding – I think it was a good idea that we spent one more night in Fort Bragg.

Skippy took initiative and asked where she was and how to get to Hwy 1. The lady was very kind and told her which street to take ... only that the street name she gave was incorrect. Skippy figured that one out later, found the right road and enjoyed the curves as much as she could. She was a bit frightened ... alone, without map, no cash, it was getting dark, the fog got denser and on top of all that crazy locals "licking her ass".

In the meantime, I made it all the way to the Golden Gate Bridge. I knew Skippy had no money and the bridge is a toll bridge, so latest here I would catch her. Of course that evening the bridge was for free and there was a risk that Skippy would just ride pass the toll booth without stopping. I parked the bike and went to the security officers at the bridge to check if they could help me finding Skippy. The lady was very kind, called the California Highway Patrol (CHP) and informed them to look out for a lost-looking pink Suzi.

I waited maybe for another half an hour and then she came :) Huge relief on both sides. Then we got ourselves together and made it safely to the motel in downtown of Frisco.

(not much photo footage but some in the travelogue)

We were in shock when we went for our walk with girls. OMG – it was DIRTY and full of hobos. Besides that within a few blocks in the neighborhood we did NOT find a single piece of green, no lawn, no bush. All trees were covered either by metal grid, concrete or hard sand. Poor Lyra was in stress.

She needed her green to do her “business” - the looks from her face told it all when she then in the end could not hold back any longer. Ulpu had no problems with that part. However she got attacked by some 50kg heavy Mastiff coming out of some garage. Ulpu squeeked heavily and Skippy was able to grab the dog by its neck. Excellent reaction! Lucky for us all nothing really happened but Skippy was all wobbly and wrecked. Hertta not being there and then this attack, that was almost too much for Skippy. Poor girl. 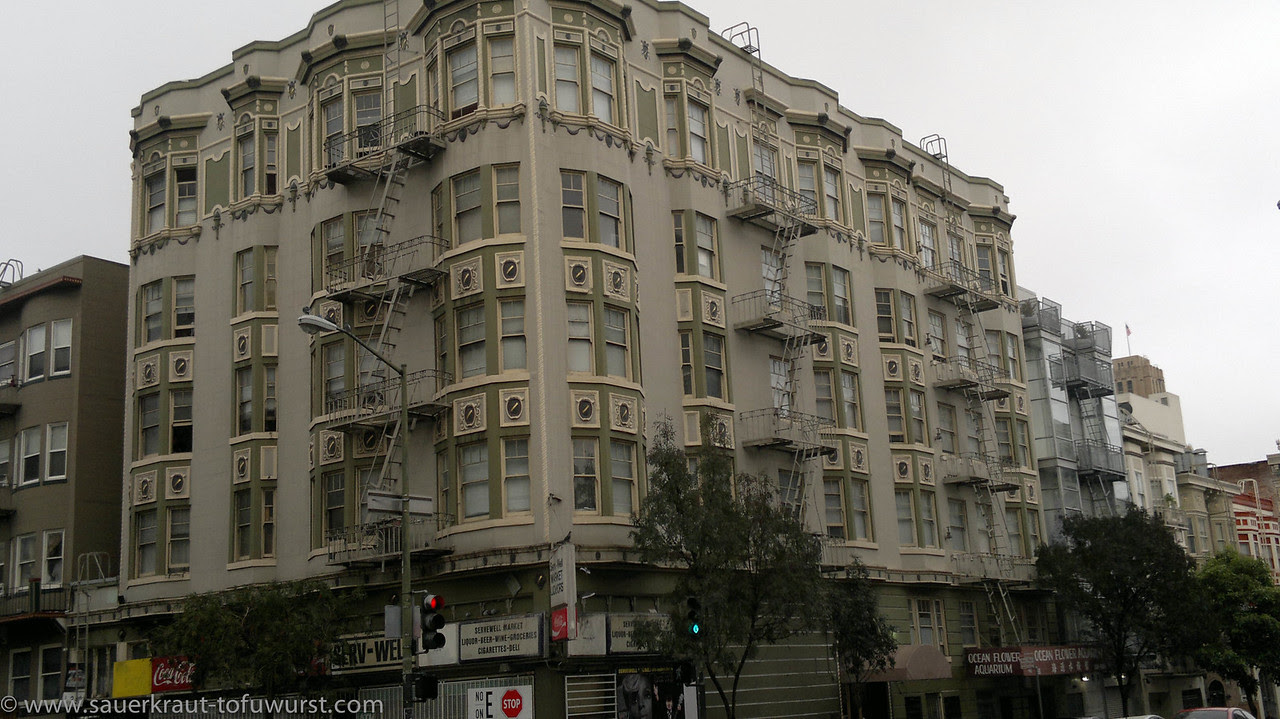 The next day I went to prison!