PART I: Planning to ride in Death Valley

The moving rocks on Racetrack Valley fascinated me and it seemed like from Furnace Creek it would be a decent loop for a day-ride. Matt (another ADVrider inmate) recommended to visit Titus Canyon. I checked what that was about and it looked interesting and doable. The racetrack would be a 27miles washboard road to the playa, well we had worse in Africa ;)

After that my plan became a bit foggy. Either the 27miles back and via the highway back to Furnace Creek or via Hunter Mountain, some more gravel and then the highway back. The sun set early around 1630 and it all depended on long it would take to get to the Racetrack – I would made that decision there.

Now Death Valley was (and is) no joke. That is serious remote travel! If I would get stuck there, most likely there would be no choice and stay overnight in the desert and find a ride back the next day. From Teakettle junction to the next point of civilization would be about 100km – a bit too much to hike in darkness (especially when the coyotes want to come along). I also instructed Skippy that if I would not be back by 1900 she should get worried.

Part II: Time to go
It was a lovely morning. I got up early and was ready for my next endeavor. Was I really? I had plenty of water and I wanted to fill up my fuel tank as well as my 10l jerry can. Surprisingly the service station in Furnace Creek was closed for this morning as they performed their yearly inspection. Was that a sign not to go?

I filled up in Stovepipe Wells and rode towards Beatty. The Titus Canyon road was a very narrow one-way road. The first few kilometers were decent gravel with some bumps and some washboard here and there. The climb over the pass contained a few technical sections nothing dramatic (Cinnamon Pass was much worse). Once in the canyon the road was pretty smooth.

Titus Canyon was dramatic, spectacular and really worth the trouble. It was also possible to come from the other side to the exit of the canyon, park your vehicle and hike into the canyon. Maybe next time. I was in good mood as it took me less then 2 hours to ride through the 27 miles (43 km) even though I stopped a few times to take some pictures. 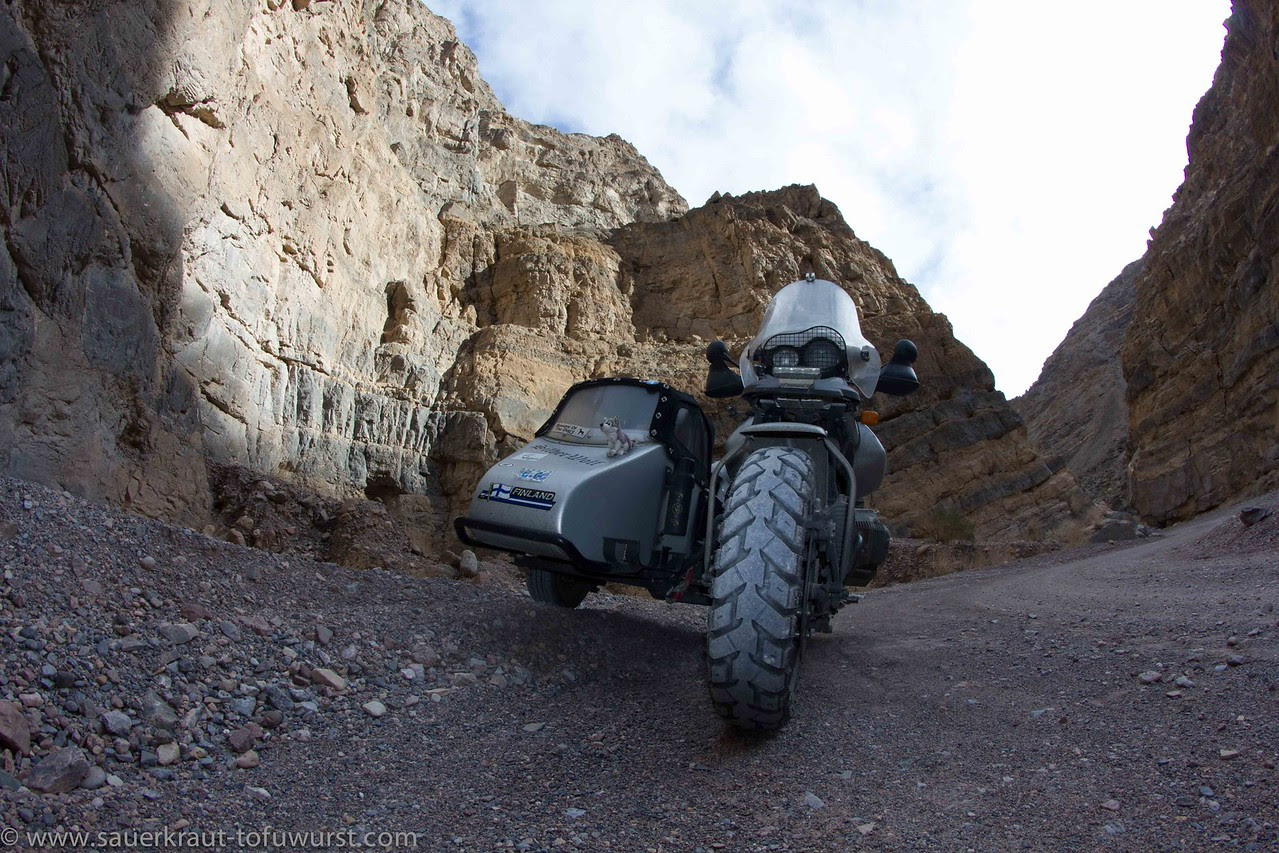 Then on to the Racetrack Valley. Since I was not sure if I would come back the same way I quickly circled around the Ubehebe crater. It was magnificent. One of the amazing things in Death Valley was that endless vastness - nope not enough ... more like vastest vastness (unendliche Weite). Even something appeared rather close it typically took quite a while to get there.
I turned from the paved road onto the Racetrack gravel road. The washboard started after a few meters and it was not just washboard but really seriously bumpy, rough and tough. Max speed was 30km/h and even that was too fast in some spots. I took it easy and the consequence of that was that I arrived at the Racetrack playa late in the afternoon.

The sun was hiding behind clouds and I was looking for those famous rocks. At first I did not find those instead I saw a dead spider. Then I asked from somebody else where I would find those rocks and the person told me to continue a few miles on the washboard disaster road and then I would see those. 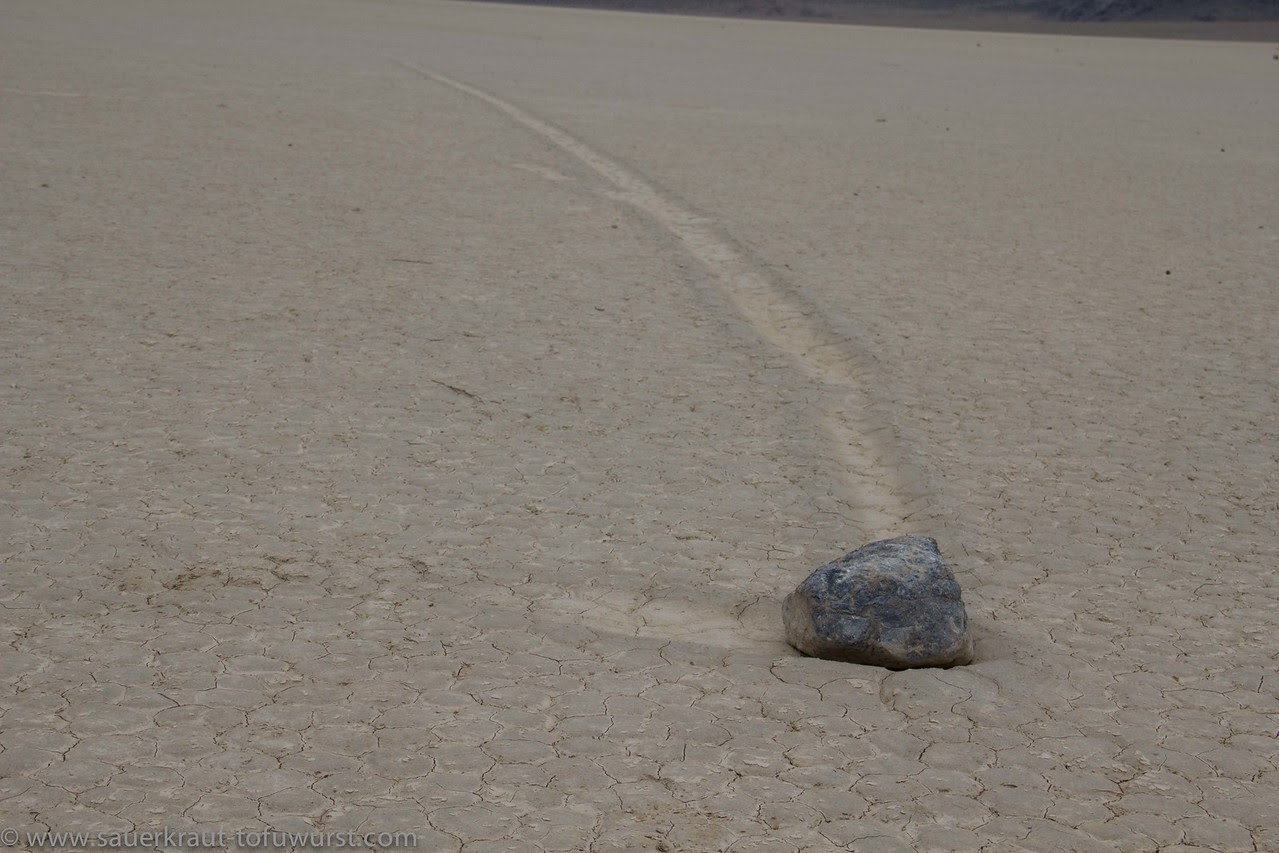 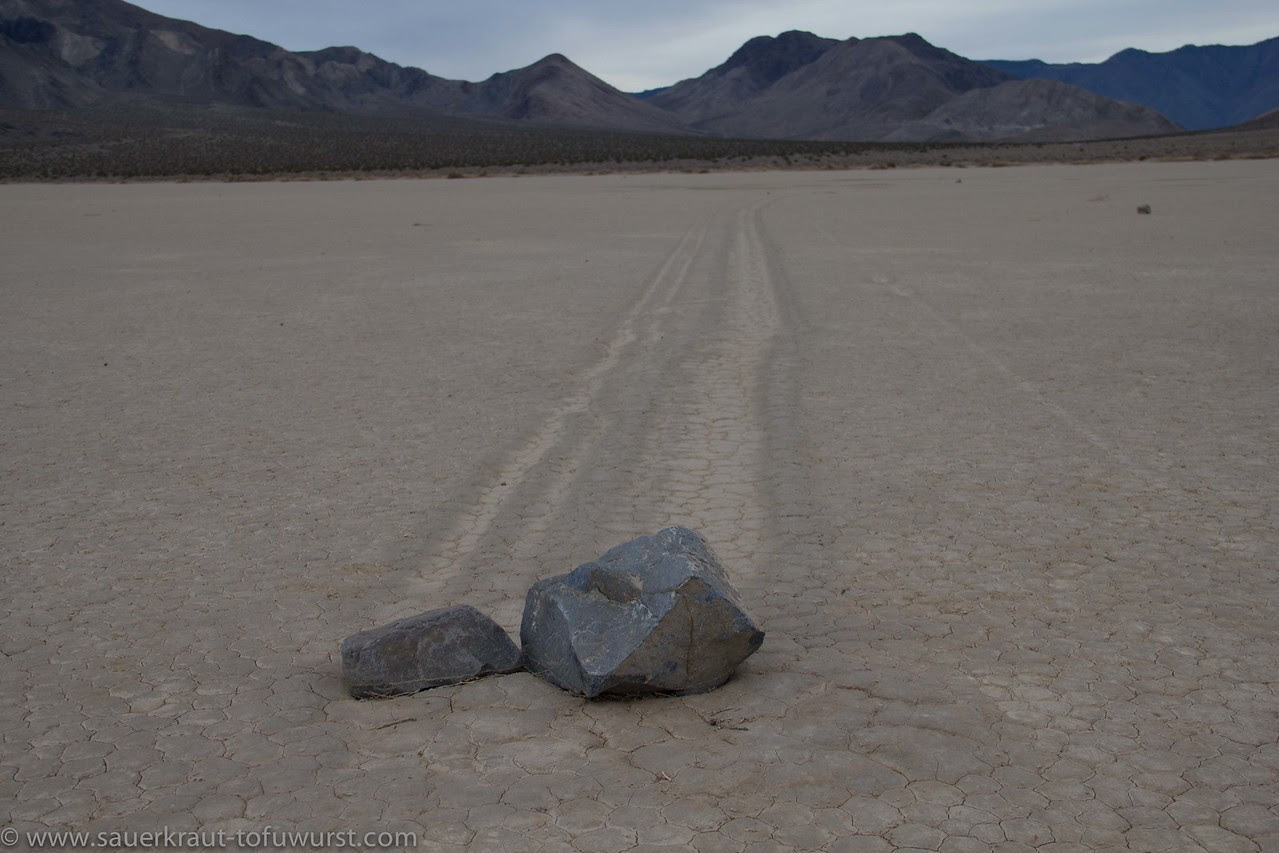 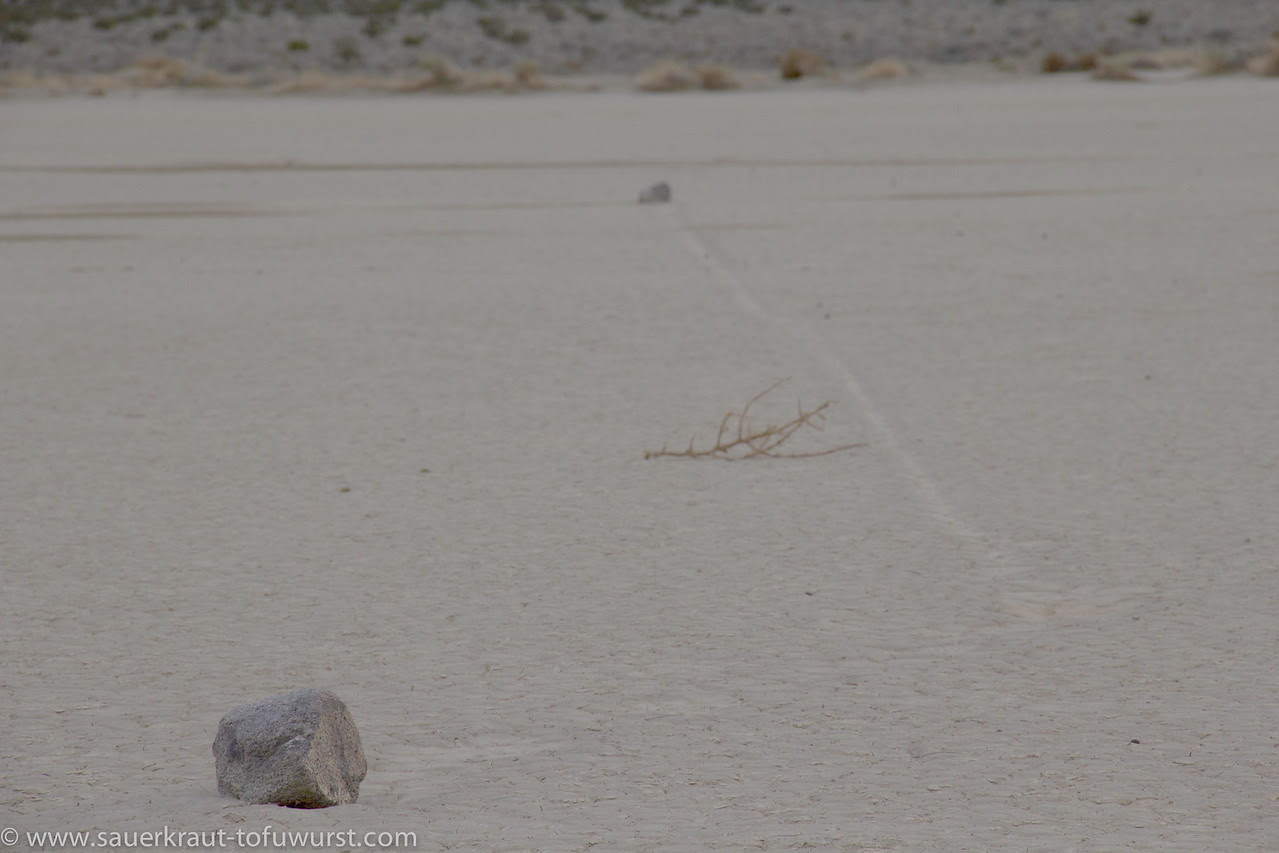 Obviously I was not alone and a few other photographers were hunting this mystery. And so I got into a chat with Chris from the Los Angeles Times. He obviously saw an opportunity for a great story and conducted a short interview on the playa - totally awkward :D

After we were done it was time to get a few last cool shots and hit the road back to civilization. It became clear to me that the mountain road was out of question. Unknown terrain, more miles on gravel road and I was not sure what the rangers really meant when they judged the road as “decent”. 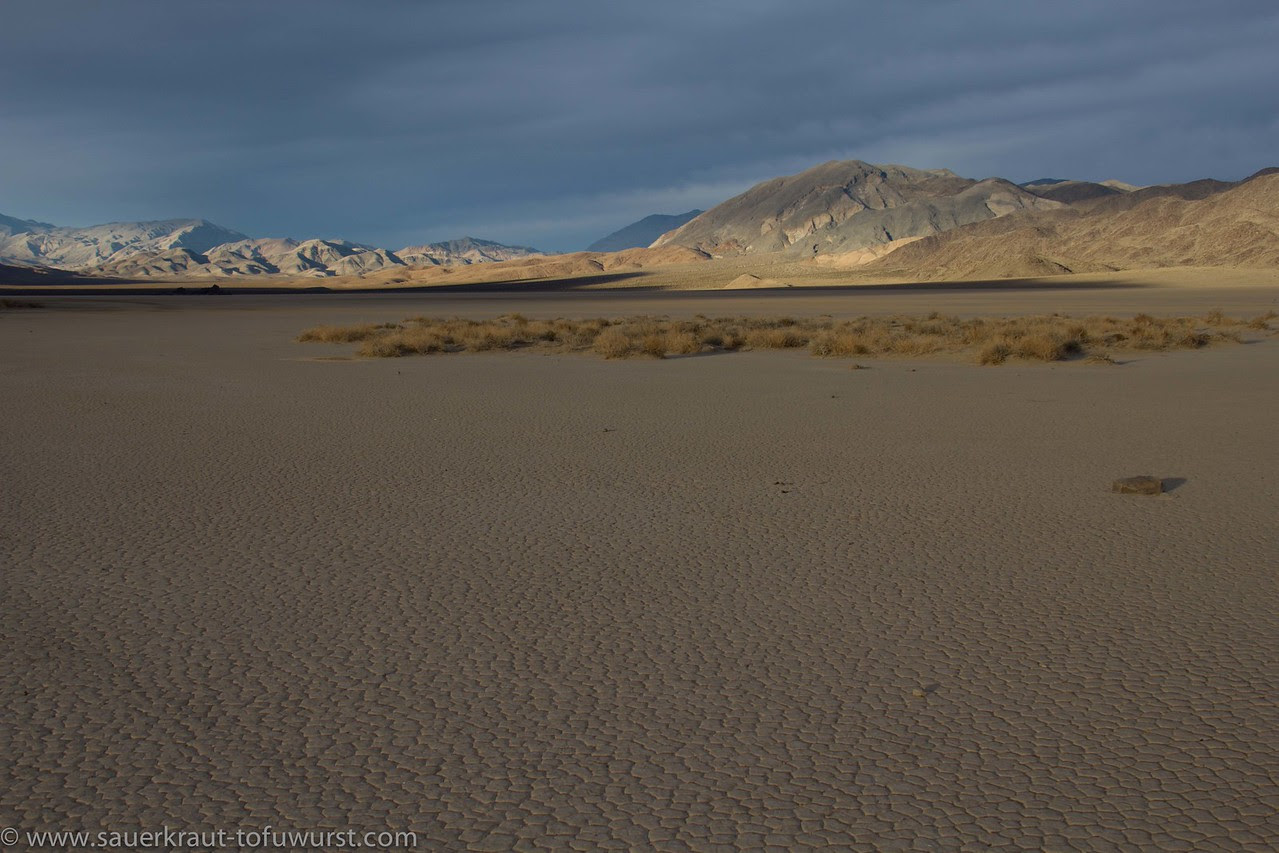 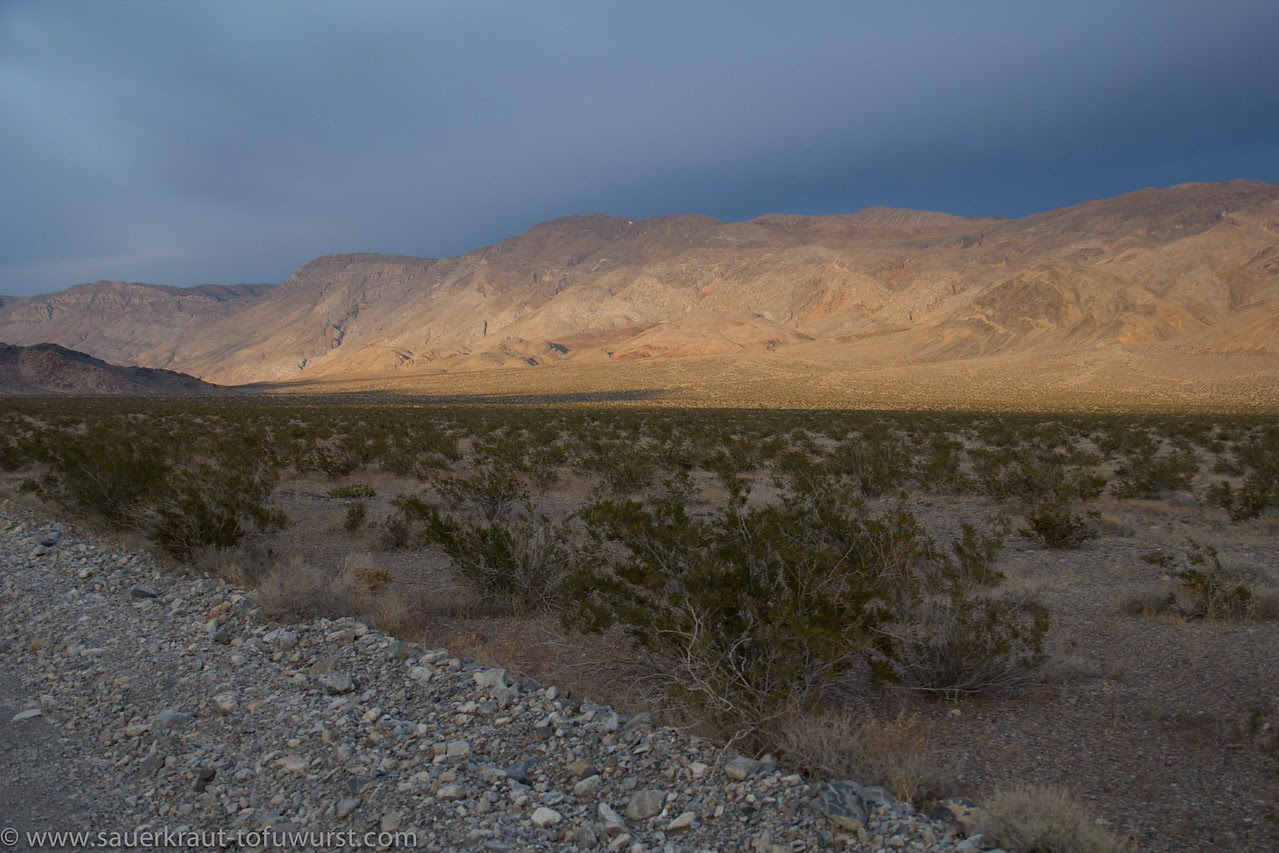 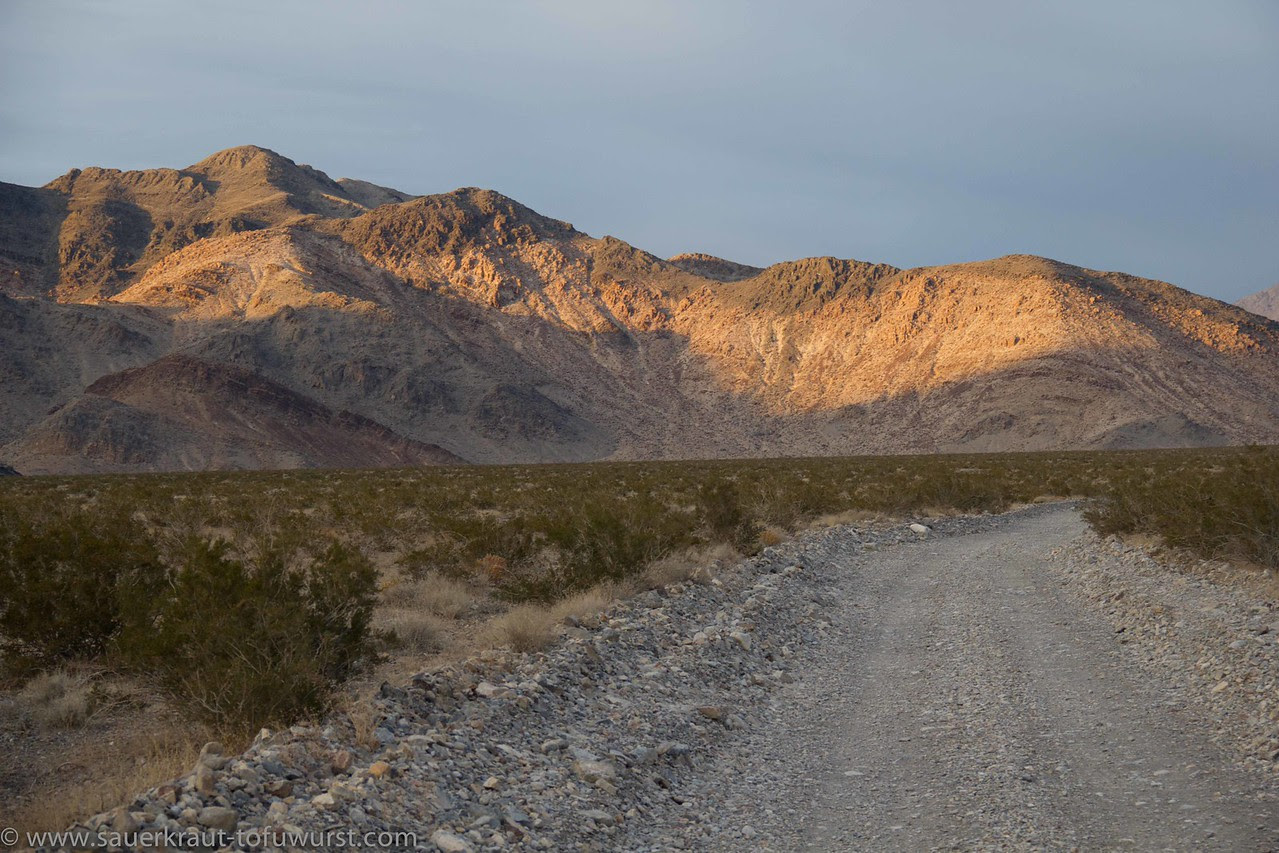 Part III: HELP!!!
Now the theory is that either you go really slow on a washboard road and eat the bumps or you go fast and “fly” over. Sun was setting fast and so I tried option 2 and went faster when suddenly and without prior warning this happened:

Without warning the steering was very heavy and basically the hack went where ever it wanted - at that time mostly straight. I got lucky, no huge rocks nor cliffs on the side of the road. In the first seconds I thought I had a flat tire. That was what the rangers warned about and it felt like a flat tire. The bike just went where ever it wanted, I tried to steer and hold it in the middle of the road and not flip over the elevated edges. The bike obliterated its path over those huge stones and I heard only the noises from other stones flying to to the left and right. After those shocking moments the bike came to a stall.

I took a deeeeeep breath and started to look for the cause of this disaster. All tires were ok. Did my steering damper break and got stuck? Nope! It was that darn trailing arm! I have seen in ADVrider two other GS-hacks which suffered the same faith. Those bikes had still the stock front fork and I thought this could not happen to me since I had the custom-made swingarm. That trailing arm is a serious weak point! Any R1150GS hack rider who wants to do some decent gravel – better re-enforce that part when you can!

It was now getting dark and I knew that Chris and his colleague Mark would soon come this way since they also stayed at the ranch. I started to pack my stuff and prepared the bike to be left alone in the desert. Some minutes later Chris came already and we moved together the bike to the next wider section so that other cars could pass easily.

I packed my stuff into their jeep and before we rode towards the ranch, Mark insisted to take a few shots of this stranded and desperate looking German from Finland who's world trip came to an abrupt halt. The darkness came very quick and most of the gravel road we road in darkness. After a painfully long 30+minutes we were back on pavement. I was feeling really sick.
Obviously Mark had had a long day as well as he almost rode into the ditch with 60mph because he did not see the stop sign coming (nononononono!) First my bike broke down and then dead in a jeep accident half-ways? That was not my day! Luckily he came to a stop in the very last moment after a full-break. Finally we arrived at the ranch and it was 1845 – only a few minutes before Skippy would have tried to find somewhere help to rescue me.

Even though Skippy was very worried, she prepared excellent food which was all done and ready when I arrived (good girl!). The darkness was hiding the huge disappointment in her face when I told that the bike was wrecked. What would we do now with Lara when she came tomorrow to Las Vegas? How would we get to Las Vegas? How would I get my bike out of this desert? Questions over questions!
Many questions and only confusion, disappointment, anger, anxiety and frustration. It became clear that this accident would seriously hurt our travel budget. Like all of that would not be punishment enough, my cell phone did not find any service at the campground to make phone calls for arrangements.

Part IV:In the meantime during the day - Skippy alone in Furnace Creek Ranch

Skippy enjoyed her day, had a long walk with girls and took a few pictures of the things in the surroundings.

Luckily the ranger station offered free Wifi and I could use Skype and email to start communicating with the outside world to see what can be done.

I wanted to do the maintenance on the Suzi at Matt's place (same inmate as earlier) in Las Vegas. I called him and told about our misery. He instantly offered his help and said he could come to Death Valley and get us with his trailer the following day. WOW - I was really relieved. Maybe this would not get as bad after all.

Once he emailed me a pic of his gigantic trailer I became aware that in all this chaos I most likely forgot to mention that the bike was at the racetrack and not in Furnace Creek. I think he must have been pissed when he realized what he promised.

Part VI: The next day

We were both deeply depressed and not in a good mood. We still played with girls since it was such a lovely place and there was no need to punish them. Some other people came by for a small-talk and as time went on we started packing our stuff together. When I saw this pile of things laying on the ground I thought OMG do we have stuff with and how do we ever fit all that onto the bike. Besides that not all cases on my bike were empty when I left for my adventure. Some more downsizing required here!
When Matt arrived we loaded his truck full and drove north. Skippy was following us on her bike since we would take a different route back to Las Vegas. About one hour later we arrived at the Ubehebe Crater. The wind was terribly gusty. As soon as I opened the car door it flung open and I got beaten by sand and small stones.

Skippy almost fell when she stopped her bike. No way that Skippy and the girls would wait in this weather while Matt and me would get my bike. We parked her bike down the hill and drove towards my bike. It took us about one hour to make the 13 miles to my bike. It was still there and no signs of vandalism or theft (I was somewhat worried).

It took a while to find a spot to make a U-turn with the trailer. Then finally we could start loading the bike. We were in a rush, no time to loose. The sun was already very low and we knew it would take us an hour to get back. Matt pulled over a few times for the faster moving jeeps. We had to stop twice on the way back to adjust our load somewhat and tighten the ropes again. We arrived at the paved road about half an hour after sunset just in time before it got really dark. 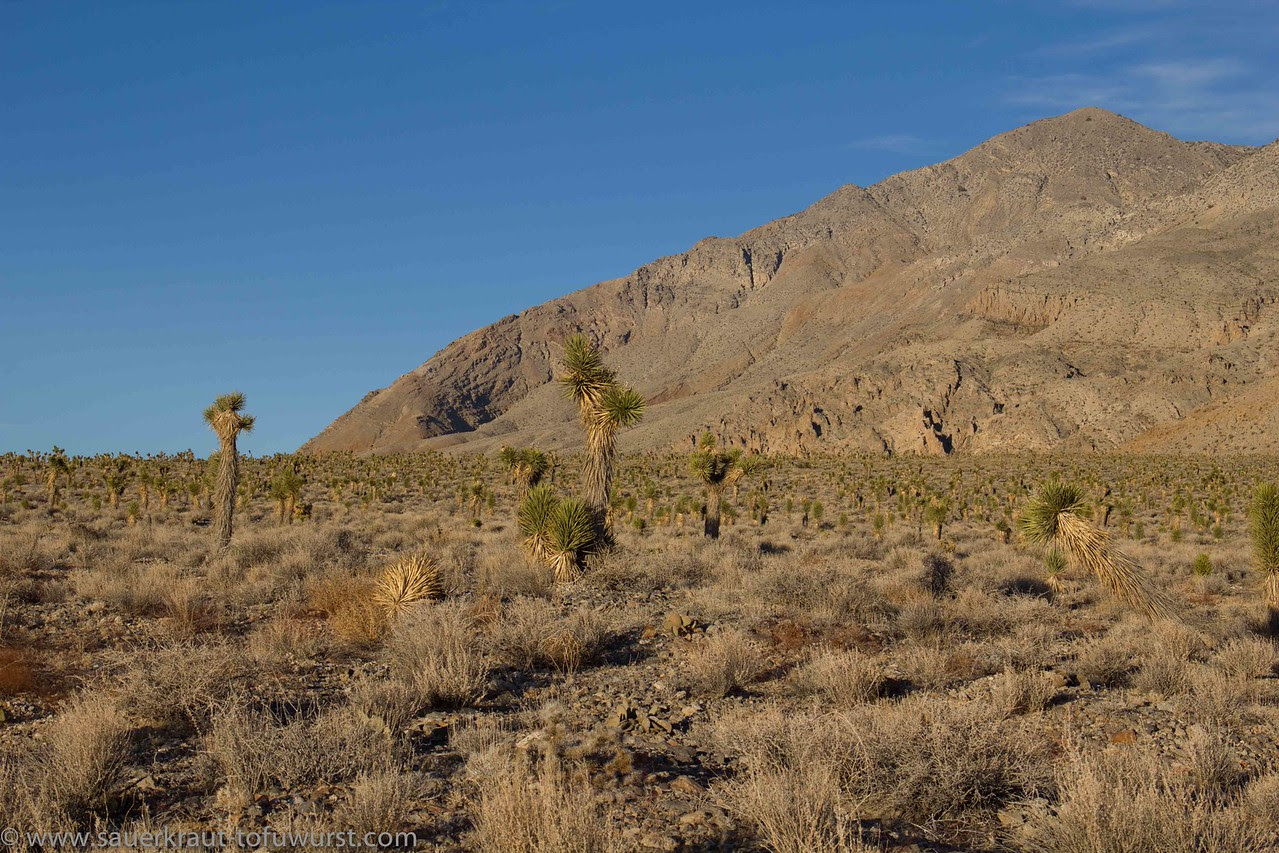 The wind was still gusty and especially Skippy was happy to get out of there. She had now a 3 hour ride ahead of her on totally boring roads, in pitch-black darkness and chilly stormy weather. Two intermediate stops later we arrived at Matt's house, took off the trailer and drove through Las Vegas downtown to our motel. Thanks a lot Matt for rescuing us! Skippy managed all fine - I was proud of her. She was totally dead, frozen and her toes were all white - poor girl. Now it was time to calm down and tomorrow we would pick-up Lara from the airport. I would need to come the next day to Matt and check what all was broken.