Next morning all beauty was gone. It was raining, the mountains were all covered in clouds and it would stay like this for the whole day – sometimes more rain sometimes less. Once we entered Teton NP the driving felt like being in a parade. Constant slow speed and no point in passing. I already learned earlier that vehicles in front may make a sudden full-stop or turn left or right without any indication (in order to take a picture or so). Maybe the bad weather scared off a few people, but then we realized that this day was the day when the park entry was for free – so much for that!

We crept through Teton and Yellowstone National Parks. Yellowstone was certainly beautiful with its meadows crossed by rivers, the waterfalls, the hot springs and mud pools with the “lovely” smell of sulfur (in plain English: rotten eggs). Memories of Rotorua, New Zealand, came back and I had no need whatsoever to stop and take a picture :D

We stopped once in a while either to put on more clothes or to take a picture when it did not rain for a second. With all the road closures it became evident that we would stay in West Yellowstone overnight. The question was whether we will ride to Old Faithful and back all the way. We were both getting too wet even though wearing rain-overalls, it was chilly and Skippy was in a no-go mode. We decided to skip Old Faithful.

The weather was much more inviting the next day. It was still cloudy and chilly but it did not rain and occasionally the sun came out. The great aspect in our current lifestyle was (or better say is) that we could do whatever and we re-planned our re-planned plan. Instead of heading straight to Helena we rode back to Yellowstone, visited Old Faithful and then rode through the park (well there was only one choice since the road between Norris and Mammoth was also closed) all the way to Bozeman where we had already booked a motel in advance.

The ride was much more pleasant compared to the previous day. Partly because of the more comfortable weather and partly because it was emptier in the park which meant faster riding :)
Yellowstone was certainly a great experience for us. We saw all sorts of wildlife (including bison so close that one could touch them - no bears though), stunning landscapes with geysers, creeks, meadows, waterfalls and cascades. The speed limit did make sense and one land-rover in front of me almost went to the ditch on a straight piece of road ;) 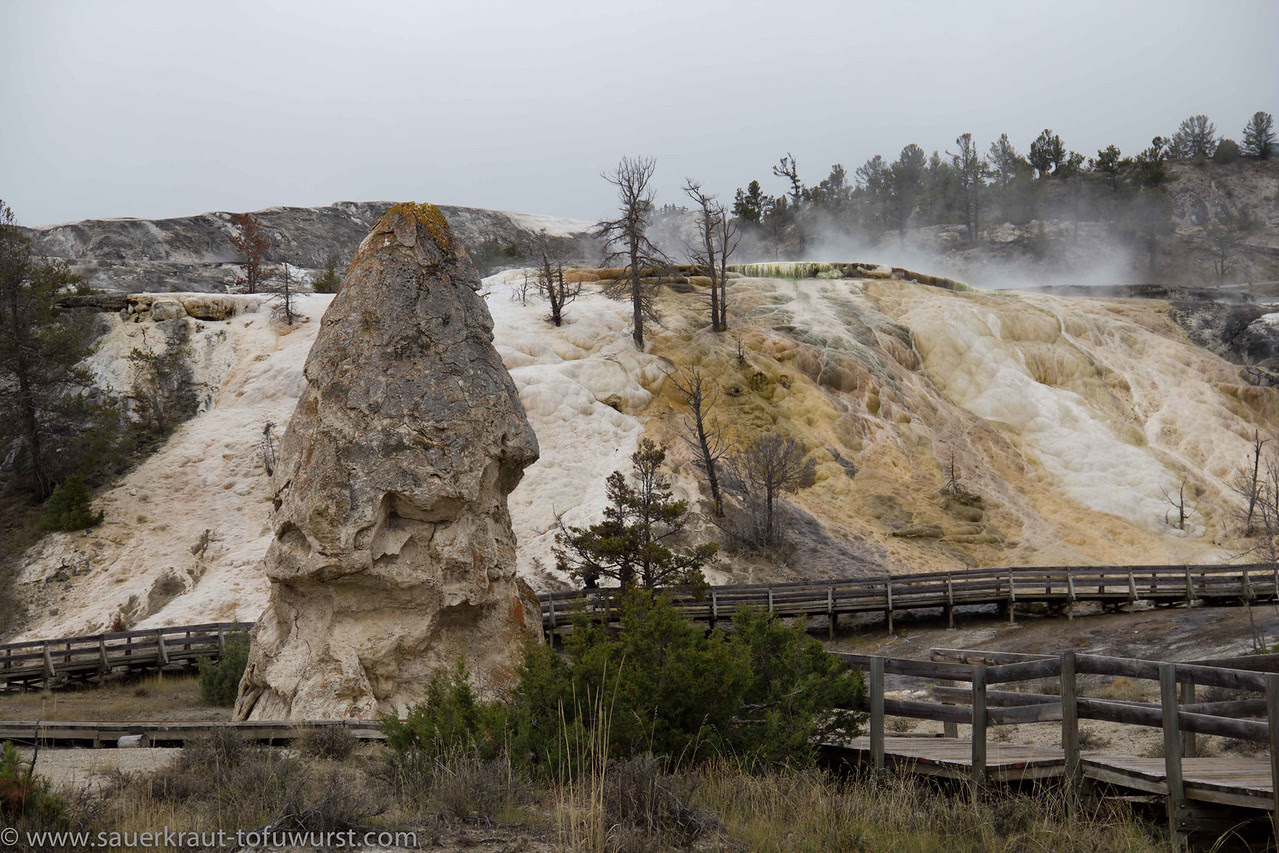 The road from Gardiner (North entrance to Yellowstone) to Bozeman was boring and since we were already late we skipped the smaller parallel road which I had planned originally.

When I was in my early studies a relative asked me to go as an exchange student to Bozeman. This did not happen due to my horrible English :D (I did not get enough points in the TOEFL-test). Now 30 years later then planned, I made it to Bozeman, Montana ;)