Since Silver Lake State Park was still closed we diverted a bit from the “original” trail and went to Gifford Woods State Park where the tent sites were in the middle of the forest. We wanted to stay two nights but the first night was almost freezing cold (+3C, 35F) and our gear are not made for those kind of temperatures. I guess the campsite is great in hot weather when the trees provide plenty of shade. After a freezing night we left the next morning and continued the Puppy Dog Trail. Ok, it was most of the time, since I did not want to spend more time on navigating than riding, so I took some different (gravel) roads once in a while.
Now we knew that we were a little bit too early in this part of the country and we would need to find a motel or so for the next nights. We approached Waterbury and our previous internet search did not provide us with many options. As we continued towards Stowe we settled for a lovely cabin in the middle of the forest – called “Cabins in the woods”. If they would have been cheaper we could have stayed there a whole week. It was spacious, warm and had all the features a cabin should have ... ok it did not have a sauna :D
We were now somewhat ahead of our agreed schedule with Tim another ADV rider who offered us some tent space with sauna! I contacted him and it would be ok for him that we came earlier. We continued to ride through various backroads, went through Moscow and made it in the early afternoon to Tim's place.
Once more we experienced an overwhelming hospitality of locals towards strangers where the only connection was motorbikes. We could use Tim's Wifi and had a nice chat with his brother Eric who worked in the wood shop the other day.

We enjoyed the sauna very much and as the nights stayed pretty chilly we slept in the sauna cabin. The place had a nice lawn where especially Lyra could play a lot – at least one happy dog.
Thank you very much Tim for your generosity. Before we left, Eric and “Guymanbro” came over to say hello and look at those crazy people who travel with three dogs :D We had a nice chat while we were packing our gear together.
It was Memorial Day weekend and we headed via some lovely gravel roads east. The ride took us along HWY110 and we managed to see Milan and Berlin within a few minutes. We entered into New Hampshire and obviously there was no law to wear a helmet. We greeted many Harleys and some lonely GS riders who did not protect their heads. Well well folks that might be fun, but it is not safe! My helmet saved my life back in 2010 when I had my bad accident.

Later on we passed Mt. Washington and made our way towards HWY 112 – the Kancamagus highway. Instantly when I bought the map in NYC, I wanted to ride that area and that road in particular. It looked already on the map tasty and now when I rode it it was real fun. Too bad that there were occasionally a few cars in front and tricky to pass. The joy did not last too long though (the HWY is only 50km long) and we started to look for accommodation.

As we were standing there and checking out the first place a young couple climbed out from a pick-up truck and approached us. They saw me riding my sidecar and the guy was very excited about it and we had a small chat. Then we explained that we need to find an accommodation for tonight and since this was his hometown he was really helpful and checking some hotels for us. A few minutes later he found one which would take dogs and he even offered to guide us there since I could not find the place on my GPS. The hotel would have been 89USD – I guess a fair price for a room on Memorial weekend.

On the way to the hotel I saw a few steam engines and a sign 'Clarks Trading Post' and I bookmarked the place for a visit the next day and to take a picture. When we arrived at the hotel he explained that he checked a few other places and they were all fully booked. And then they offered to stay at their place which was about 20min ride away. We gladly accepted this generous offer and followed them to their place. They had also a dog – seven months old boy called Halford (after Rob Halford, the lead singer from the absolute fantastic Heavy Metal Band Judas Priest).

Our track:
and here is our track from NYC to Gifford Woods, VT 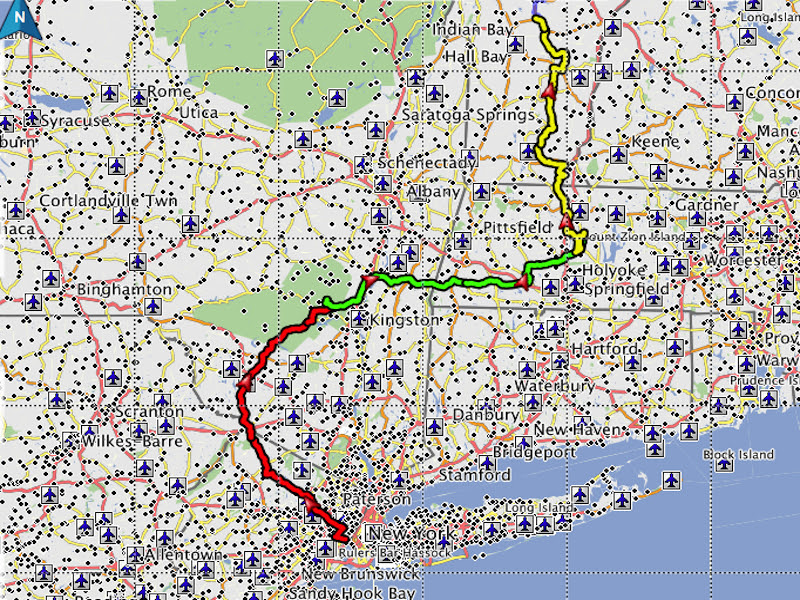 Click here is you have trouble to watch the video.