The road was full of diverts on the last kilometers before the border to Burkina Faso and the last one was at the border crossing itself. The different offices appeared to be somewhat scattered around. Plenty of friendly people were pointing where to go next. Getting all the stamps was no problem. The police guy at the BF side spoke even English and maybe that's why he asked for 4000CFA for his efforts. I made no attempt to pay this and I guess it was more of a joke. 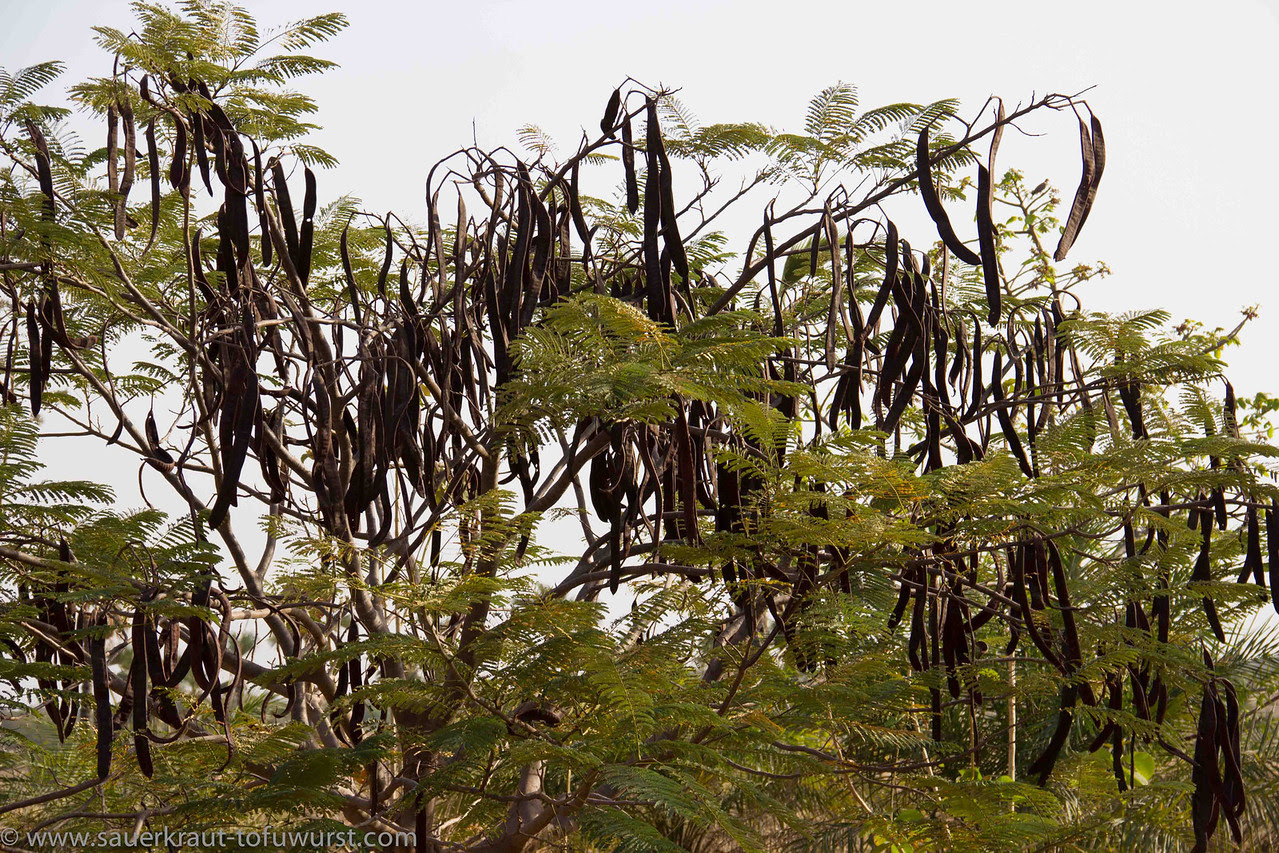 Shortly after Orodara we turned towards Banfora. The asphalt turned into decent gravel and it was in quite good condition. At least the road was better then many of the asphalt roads we rode earlier thus I had great fun when riding those. We wanted to stay for a few days in Banfora to visit some of the local attractions nearby. Unfortunately our timing was more than bad. The city celebrated “International Women's Day” and a big 3-day festival was starting. I asked from five different hotels and they were all fully booked. We tried to find a camping place and ended up in the  Campement Baobab.
They had besides camping also some huts for almost the same price and we went for the hut. It was a nice place and they offered excellent food. Unfortunately without running water, no electricity and thus no internet either. That made planning the next days and taking care of our affairs quite difficult. We stayed only one night, skipped also the cascades (they wanted some entrance fee for it and the water levels were low). The drinking water was coming from a French-sponsored well nearby. The water was tasting good and we filled all our canisters. Then we took off to go to FINLANDE!

Maybe it was that good feeling as somehow I totally forgot to visit the famous mosque in Bobo-D. Skippy had no interest in visiting there so this was fully up to me to remember. None can do. The street offered its usual variety of potholes, donkey carriages, scooters, kids etc.

We were looking for a rest place with good shade and I thought I found one on a trail and indicated Skippy to go there. I rode on a few meters to find a turning spot, found another entry to the trail, went to the spot and when I arrived there I saw Skippy rushing off on the main street. She was gone. I hurried after her and maybe 20 kilometers later she turned, came back and we were together again (obviously not so bad to be with me after all) ;)

We continued until På where we found a luxury and (in-the-end) bloody expensive hotel. My mistake or the owner's sales trick – I am not sure. Instead of paying 6000 CFA (so I understood when we arrived) for a room, he demanded 15000 CFA the next morning – a normal price for an air-conditioned room with TV (stuff which I did not ask for!). The surrounding presented itself with just some minor trash here and there and a little forest with goats, sheep, pigs and many birds. It would have been nice to stay there a little longer, but this money stuff made us decide to leave and ride towards Ouagadougou.

We went to Pension Sarah and the lady at the reception hesitated for quite a while before she was ok with the dogs. During our first night we were entertained by the neighbor disco until 02 in the morning. Followed by the wake-up call of other guests and house personal around 0600 which meant we were both dead tired the next morning. I found a park in northern Ouaga as well as a hotel nearby that park and we went for a ride to explore that area. The Women's Day was an ever bigger celebration in this city! The traffic was enormously more stuck than usually, the park was hulled in a cloud of dusk from all the people moving in there. We turned back without finding the hotel and somewhat disappointed that the park was such a dusty place. To add up to this neither did we find the one and only vegan restaurant in the city, where we could get an address from.


We looked back on our journey so far through West-Africa and what was ahead of us. We did expect that we will be an attraction, the traffic will be bad and it will be hot. What came as a shock to us was this huge amount of trash everywhere and that was the “last straw that broke the camel's back” (der letzte Tropfen der das Faß zum überlaufen brachte). In addition we met many friendly people and several extremely rude ones. The enjoyment to travel together with our dogs, the delicious fruits and the experience as such were on the positive side and those were the things which kept us going.

We got serious doubts on whether this trip to Africa was worth it. We also thought the RTW journey was still our plan and the question remained where to go next? Should we go instantly to US and Canada? Should we go even to South America or skip that? Should we give South Africa a chance? Let's not even start discussing anything beyond the next step yet. As it happened neither did Skippy have her “usual” compensative activities like Karate or running, which would increase her mood.

After reading the latest news and once more some selected ride reports, we decided that we would go to Ghana and from there to either Namibia or South Africa, depending on what is possible, feasible and affordable. We would skip Togo, Benin, Nigeria, Gabon, Cameroon, both of the Congos and Angola. Whether we would visit other countries in Africa needed to be seen.

Anyway, Ghana would be next and we went on the following morning to the embassy and applied for our visa to Ghana. This was an important step in our journey if we wanted to get the bikes shipped from Ghana. Especially Skippy was looking forward to visit Ghana as there were plenty of vegan/vegetarian places supposed to be in the area of Accra. Always good to have something to look forward to.

The next days went by with Skippy making travelogues, I was doing some stuff on the bikes, fighting with internet connectivity, waiting for electricity to come back and waiting that water is running again. Luckily the kitchen made a good couscous with some tomato-veggie sauce for 1000 CFA (about 1.50 EUR/portion).
We got our visa to Ghana without any problems and next day we left Ouagadougou towards the border. Ghana, here we come!

Then I wanted to share some other issues which do not really fit to any specific country and yet it seemed time to write about those.

Who am I?
People asked from where we are. Well, with Skippy that is clear and what about me? Am I a German or a Finn? After living in Finland for about 20 years and considering that I chose to live there, I consider myself more a Finn than a German (or at best 50/50). So my typical answer is I am a Finn. However that does not work very well when I need to show my passport – my German passport :D

Who consumes more – the bikes or us?
I have been seriously worried about the distances I can ride with the sidecar before filling again. I have “only” the 30l tank and thus I added 2 x 10l jerry cans for spare. On the other hand, besides my 1.5l SIGG water bottle I strapped one 10l proper water canister somewhere and we had a 5l plastic canister on a designated place. Our experiences were that petrol has up to now never been an issue! The shortest distance I rode with one tank was 370 km (that were 390 BMW-km, with the 17” front wheel and BMW error adjust that by 0.95 and you get real km). On the other hand, in the heat faced in Mali and BF we consumed about 5l water/person/day plus the water required for cooking and personal hygiene. On a typical hot road day and wild camping, we consume up to 20l/day (with the dogs). Our water consumption is higher then the petrol consumption of the bikes and water is right now the limiting factor!

The thousand and one control points.
What did we do on those uncountable police, customs and whatsoever stop points. My tactic had been to approach those points with slightly lower speed. Only if there was a person present on the street and clearly indicating to stop and pull-over I did that. If officials were hanging lazily in their hammocks and waving somehow towards us (that were the usual situations), I occasionally waved back and continued without stopping. Also mild waving when standing besides the street was typically ignored by me. Whenever we stopped the officials were only interested in a small talk, to watch the sidecar and to take pictures of it. WTF – not my problem and thus I seriously lost my interest in stopping! Only a firm wink to stop or pull-over by an officer on the street were registered by me and made me stop. I saw maybe once or twice that an official did not agree with my decision (tough luck) and then the person came jumping and waving on the street.

A short time out for a reflection - Don't we have a great adventure?
I would say that some things are guaranteed when you travel through Africa. You will have an adventure, experience plenty of things and you will collect stories to tell. So far Africa did not disappoint in having an adventure and collecting stories to tell. Why are we then overall not so happy about Africa. Isn't this what we wanted - an adventure? The answer to this is yes and no. Since we left home behind - and maybe differently then many other world travelers - we did not plan to return to Finland or Europe, instead looking for a new home somewhere else. In this way West-Africa has been on the other end of our scale of "future home", mostly due to the trash and the way things are overall in those countries which we visited. I think these facts have also significantly influenced what we wrote so far, maybe even without being clear to ourselves all the time. Besides this, Skippy had (or has) her own ideas, definition and degree of adventure, expectations, hopes and dreams and I have mine. Mostly they are aligned, often enough they do not fully match or sometimes not at all. Those are then extra difficult times to find joy in this riding. Maybe that is one reason that many globetrotters do travel alone?

Why is there seldom litter and trash in people's holiday pictures?
We found the answer in The BetterPhoto Guide to Digital Nature Photography by Jim Miotke p. 1733
“...before you shoot, scan the scene for the following distracting elements and eliminate them:
LOL

And here is another travelogue “Made by Skippy”.

Here are the links related to the travelogue.