We planned to stay in Aourir for 9 nights, in the end we were there for 17!

Let's start from the beginning...
It was weekend and we explored the neighborhood. We were shocked by the amount of garbage and plastic trash floating around us. It seems that people dump their trash in the field besides them and maybe they burn it or maybe not. A foul smell was often in the air either from the fumes or the rotten trash. We really had to watch out where our little girls put their noses. Fresh and old sheep heads and intestines were lying around as well as dead animals and stuff from which I did not know whether it was poison or not.

A "local guy from Switzerland" explained to it me when I observed that play of the waves carrying this huge pile of plastic bottles. Whenever there is heavy rain, the rivers bring the trash from the mountains and the trash that people dump into the dry river beds (people literally empty their truck full of trash straight into the rived beds!) get washed all the way to the sea. From there it floats out into the ocean. When there is a high tide, the tide pushes those trash piles back up the river beds. If it would not be so horrifying and smelly, I would almost call it enjoyable play to watch... 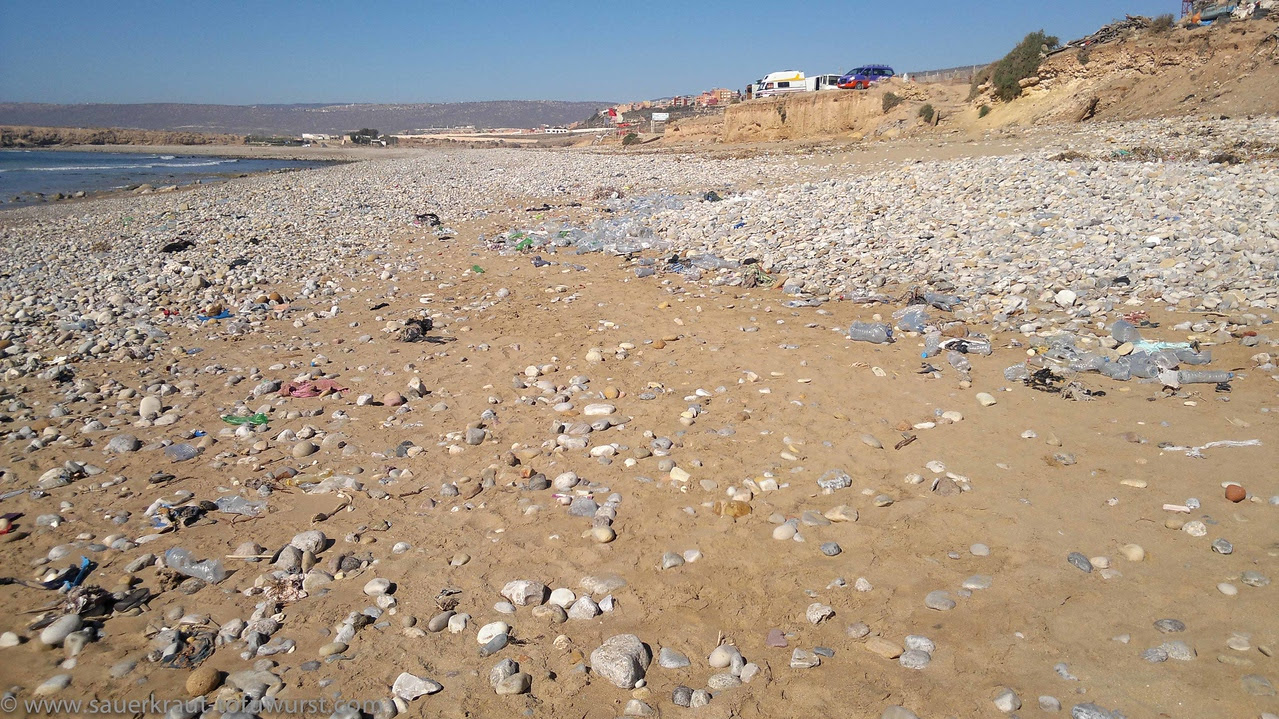 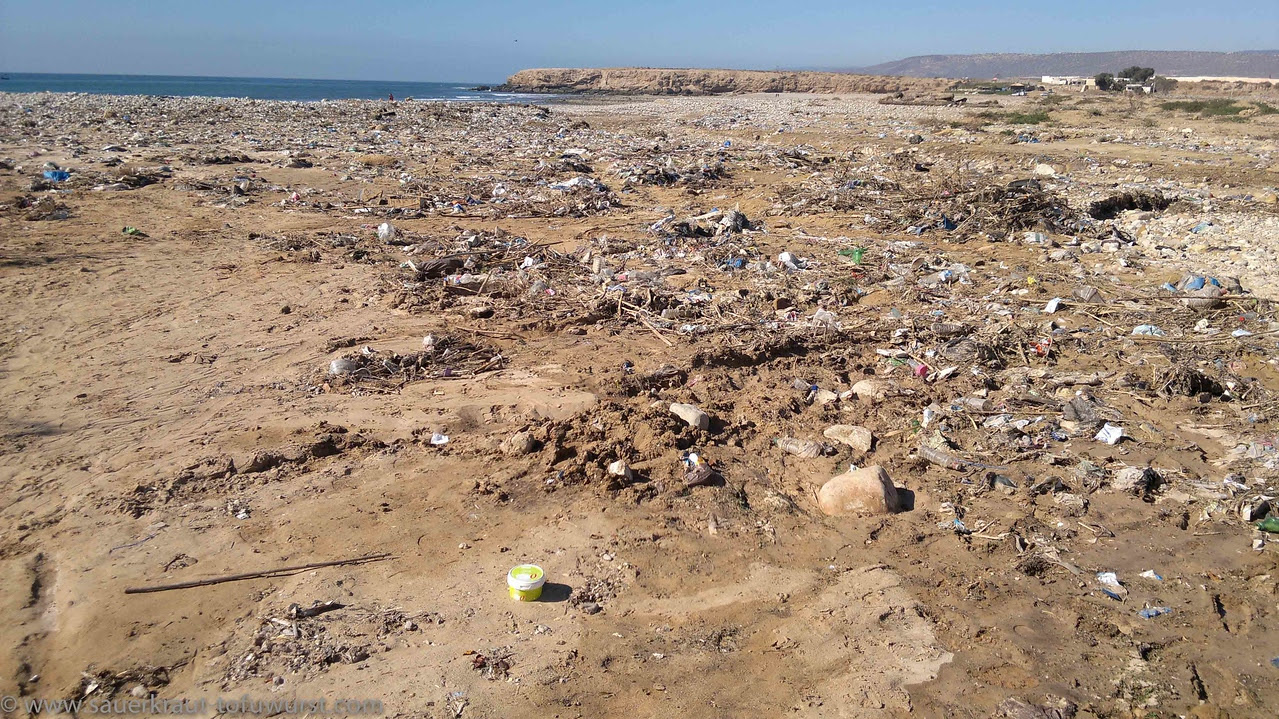 It was Monday and time to see the vet. We explained the doctor the situation and he did not hesitate a moment with his diagnose. The best for Hertta would be to have an operation and cut away the tumors. Now Skippy had a hard time to face this fact. It is always a high risk to operate an old dog (same as an old person). Weakness of the body, side effects and after effects might be tricky. Anyway, we agreed to the operation. Hertta stayed at the doctor as the operation would be performed in a few hours. We could pick her up by 5pm.

Even we knew she was in good hands and we knew she will be back, the hotel room felt empty. Lyra felt our tension and gave us some company whereas Ulpu could not care less and only wanted to play. We could barely wait until it was time to leave the hotel for Hertta. We arrived a bit early and we were very relieved to hear her barking :)

We took Hertta back in the hotel and OMG she was high. Her eyes were all criss-cross and I can imagine in what kind of drug heaven she was right now. The same evening we realized that she was bleeding a bit and also lost some body liquid(?). It was too much for us and we called the doc. He was very kind and drove to the hotel to look after her. No life threatening emergency and the vet only changed the bandage.

The days went by and the focus was on taking care of Hertta. In the meantime I was waiting for my rear shock. DHL was very quick. Within two days the shock traveled from Netherlands to Morocco only to be stuck in customs for the next 10days! Yes, 10days!

So I went to the Wednesday market in Auorir. 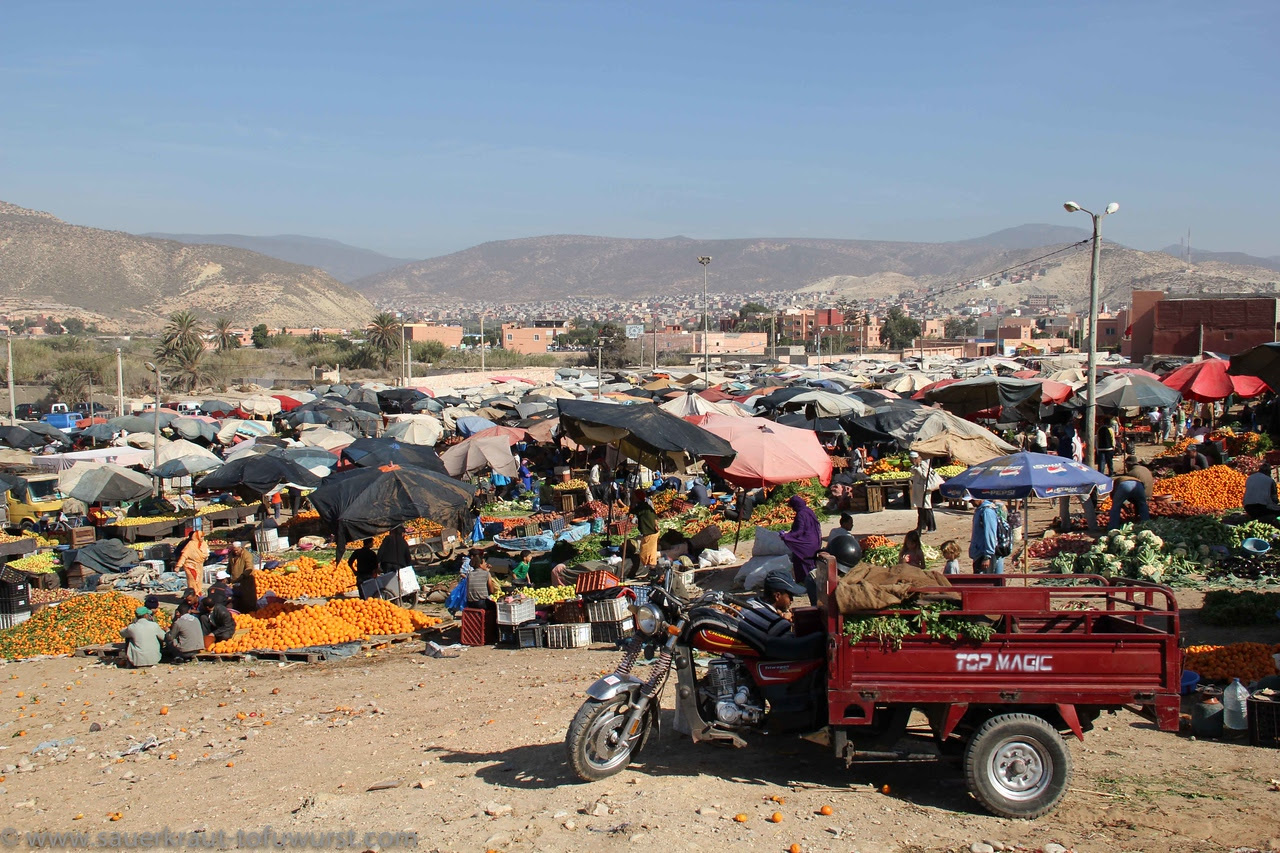 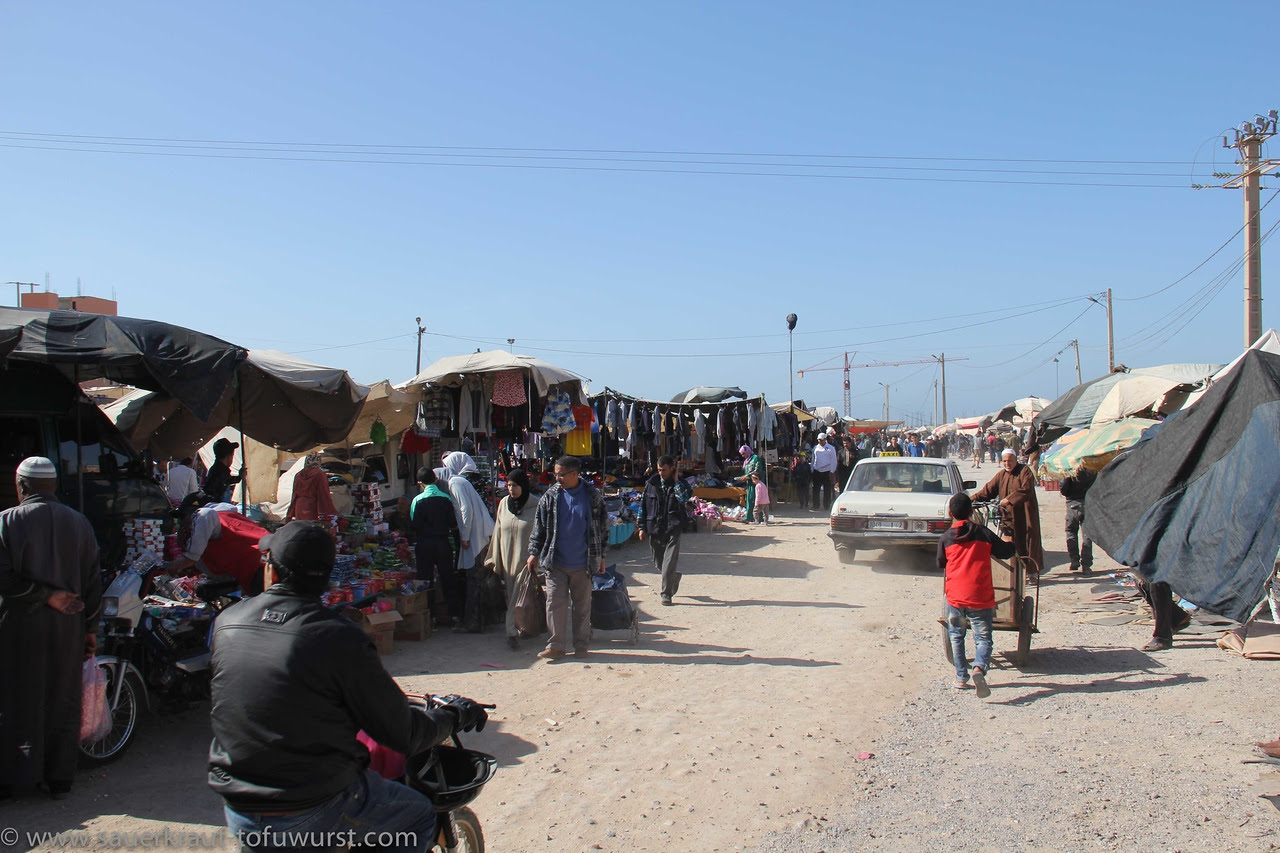 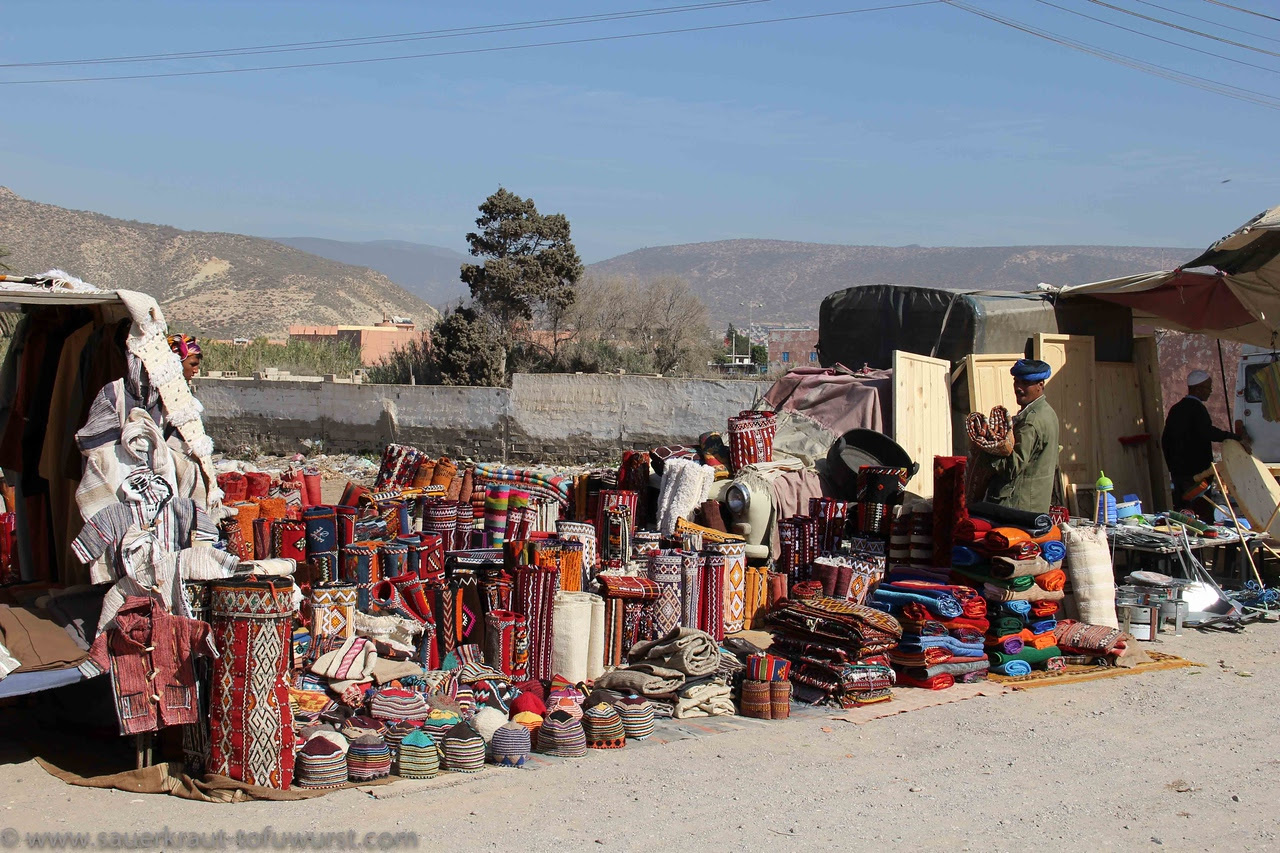 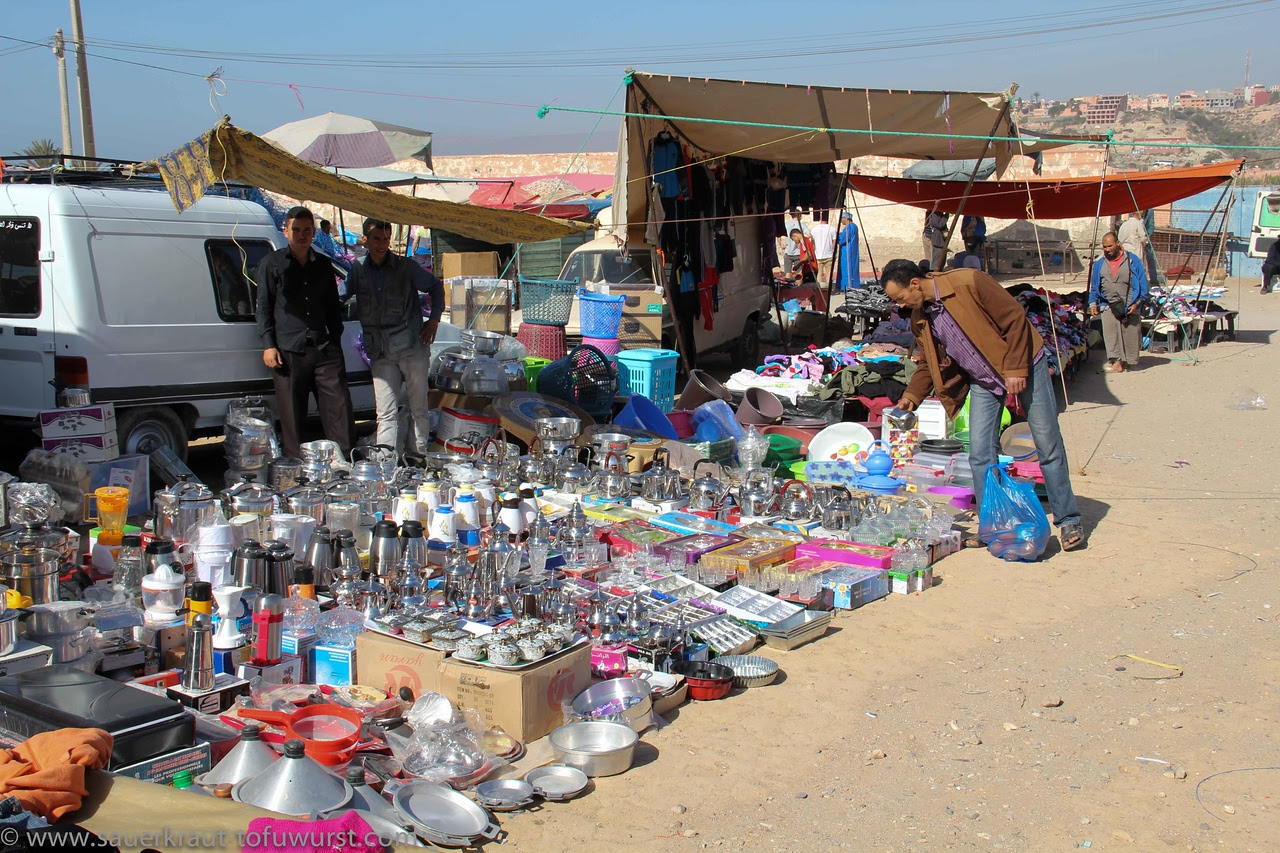 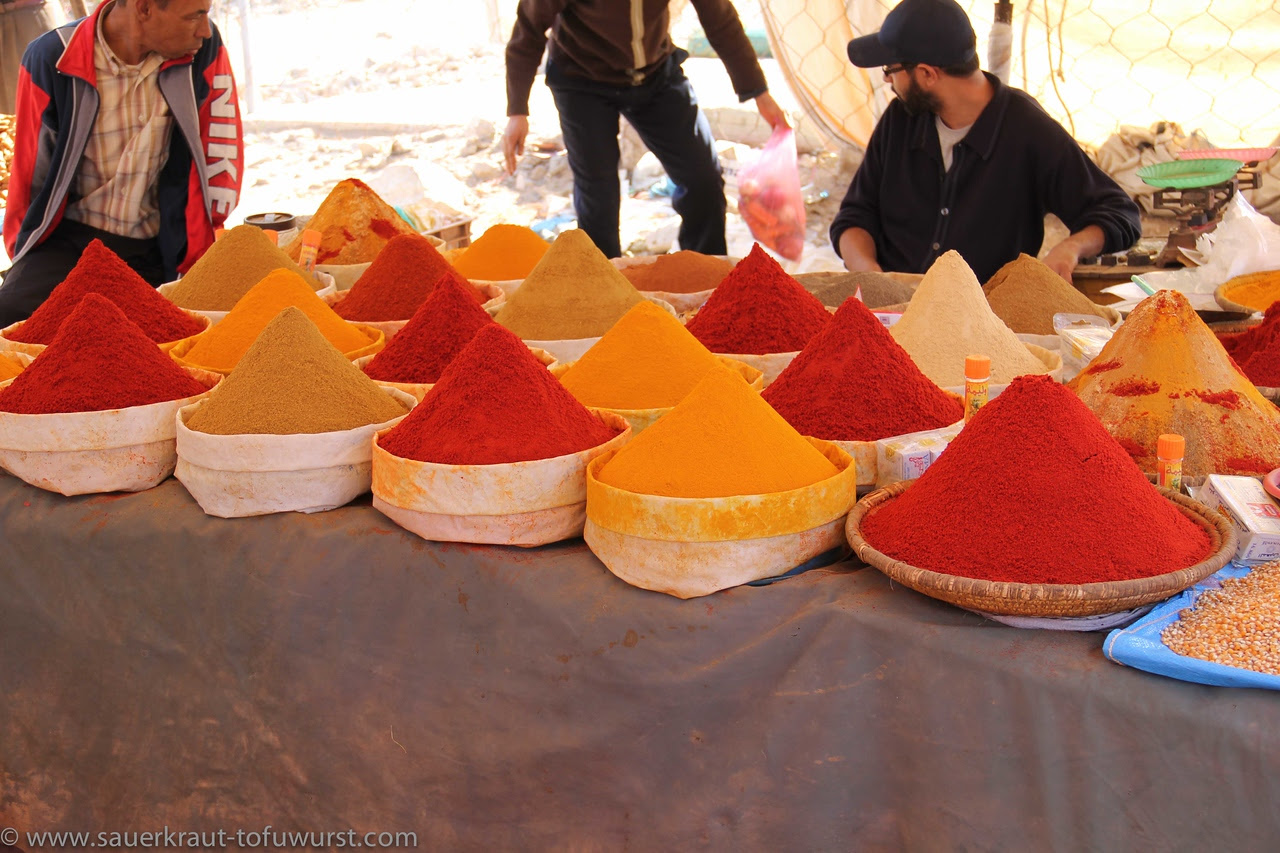 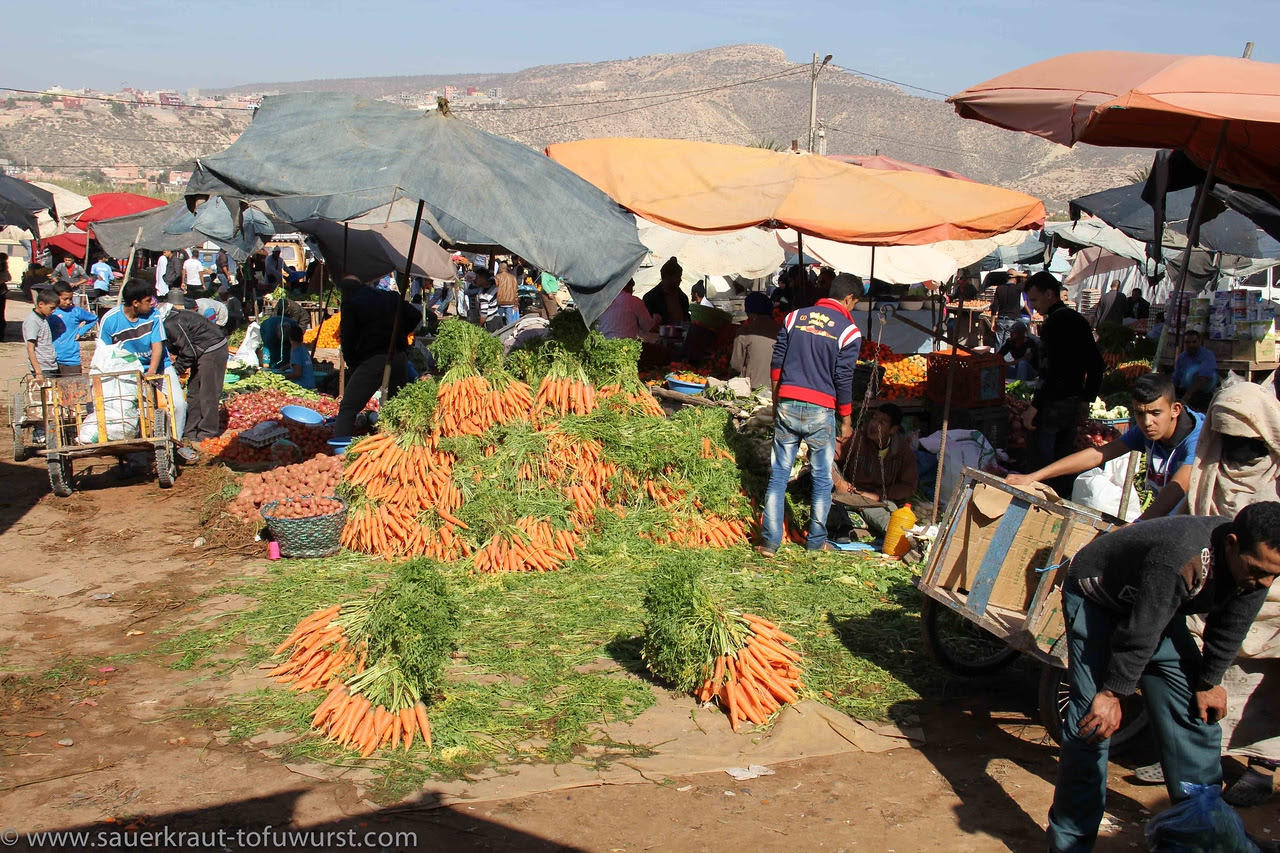 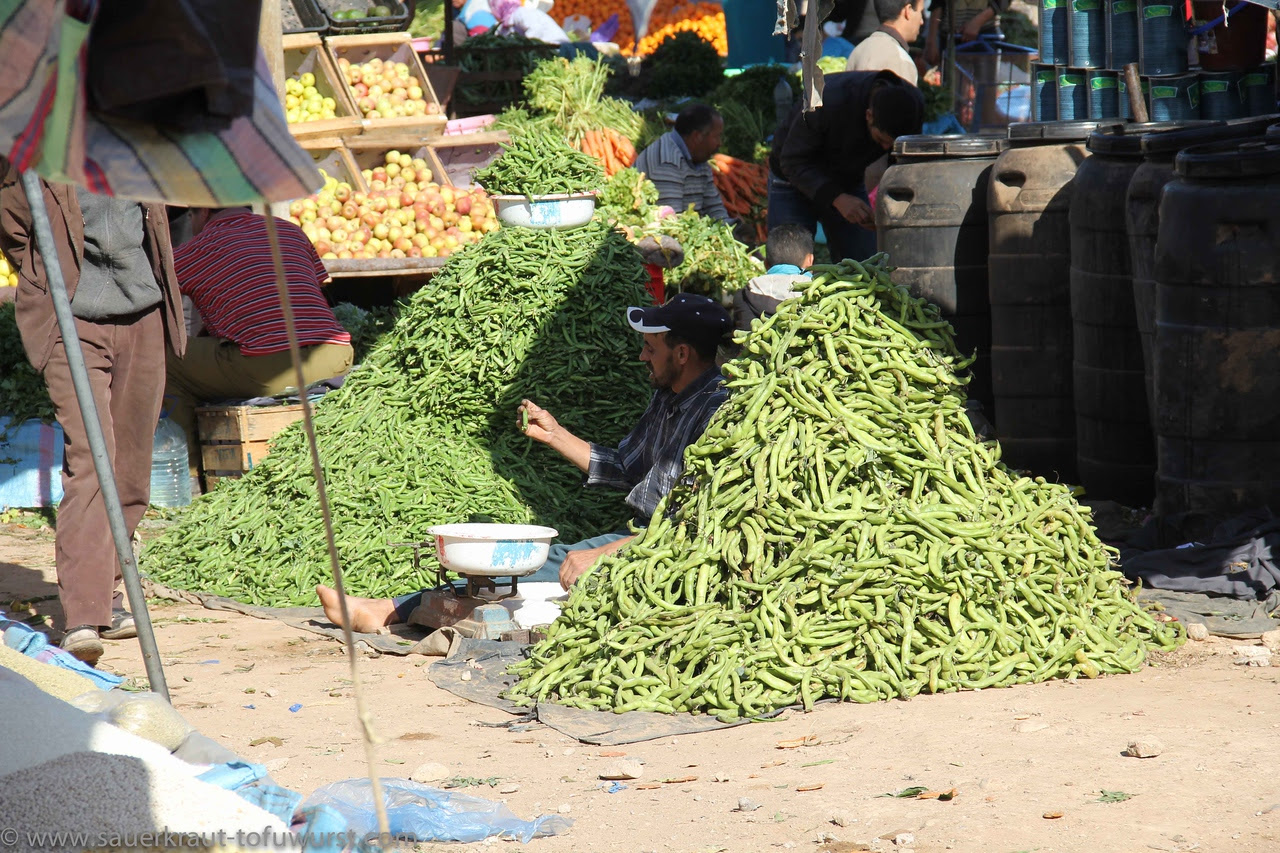 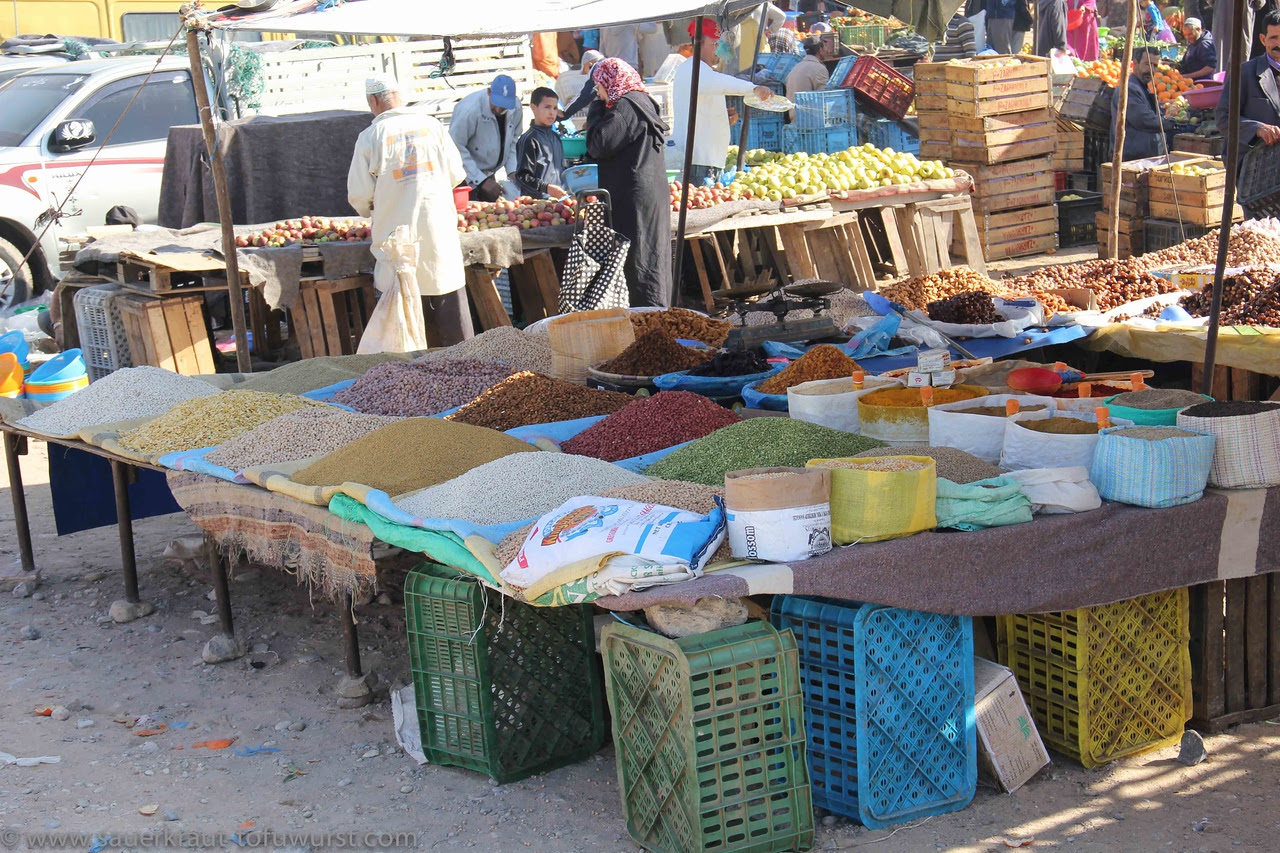 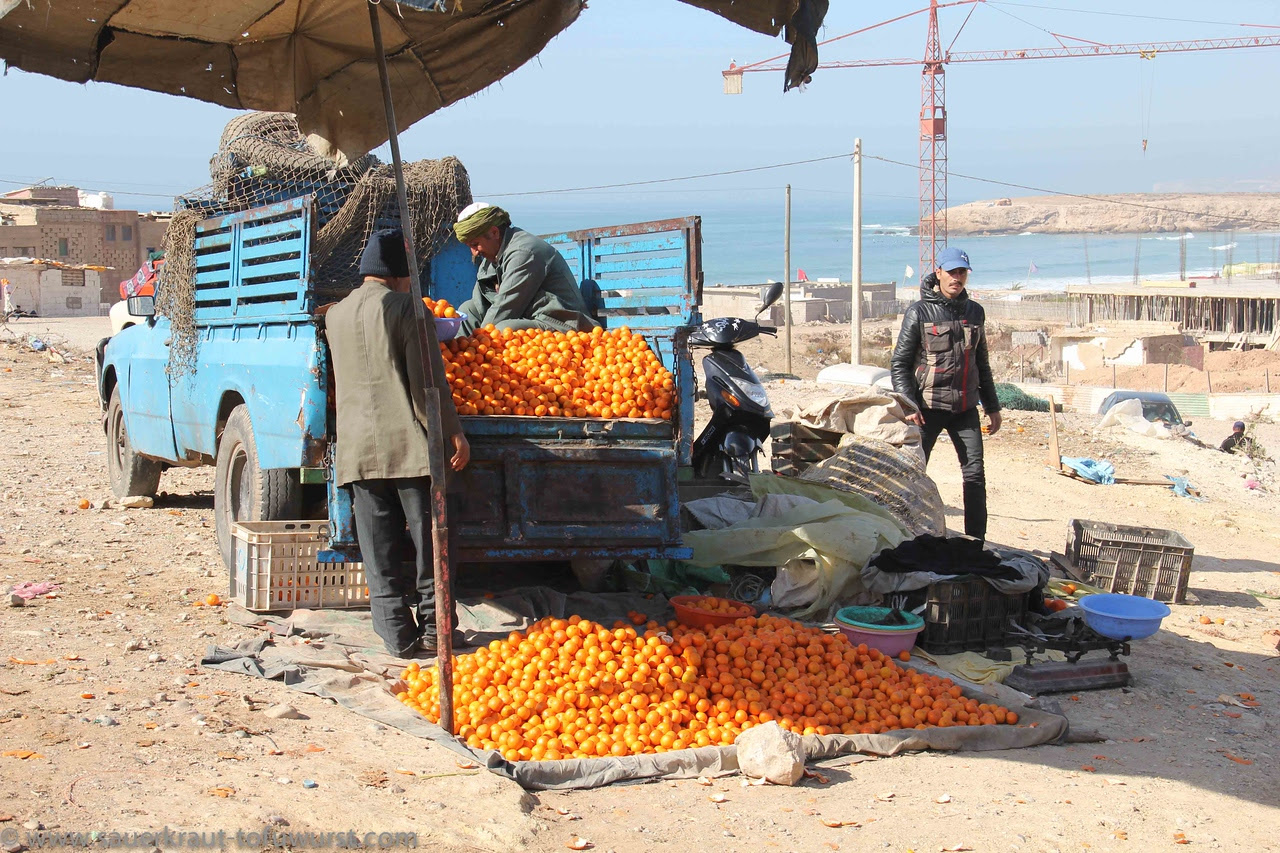 Hertta was not doing too well. Her recovery from the operation was very slow. And then worst case scenario happened. Hertta was on her way to bed when all the sudden she started bleeding a lot. Her bandage was dripping in blood. We quickly moved her on plastic bag (not to mess the whole apartment) and removed the bandage. A small fountain of blood came out of her. Panic! I supplied Skippy with all the emergency kit stuff we had, run down to the reception, called the doctor and explained the situation. It was after 10pm and he accepted to come. Then I called the guard so he could give me the key to open the front-door. I was waiting downstairs with key for the front door when Skippy was upstairs trying to keep Hertta's bleeding under control. This was the longest 30 minutes we've ever had!

Anyway, the doctor came and saw the mess. He had not much with him except for some bandage. We felt really helpless. He put a new bandage and very tight. Furthermore he went back to his praxis to get some medicine and came back some 30 minutes later. Now Hertta got some Vitamin-K boost to make her blood thicker. What a night! Next morning we went to the doctor as planned not to remove stitches, but to check how the wound is now. Now more bleeding, Hertta got a new fresh bandage and some more medicine. This seemed to work. That was why we spent 17 nights in Aourir instead of 9 nights.
I also went to the Souk - centre commercial in Agadir. A few impressions from there: 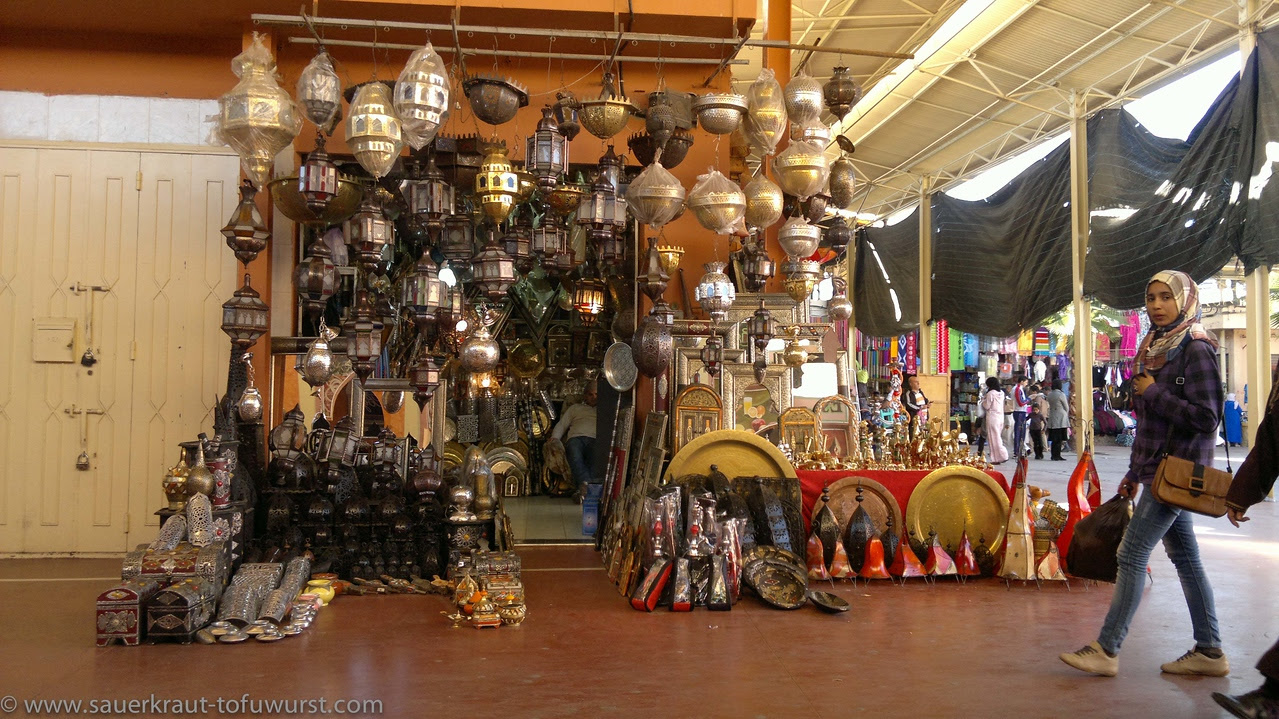 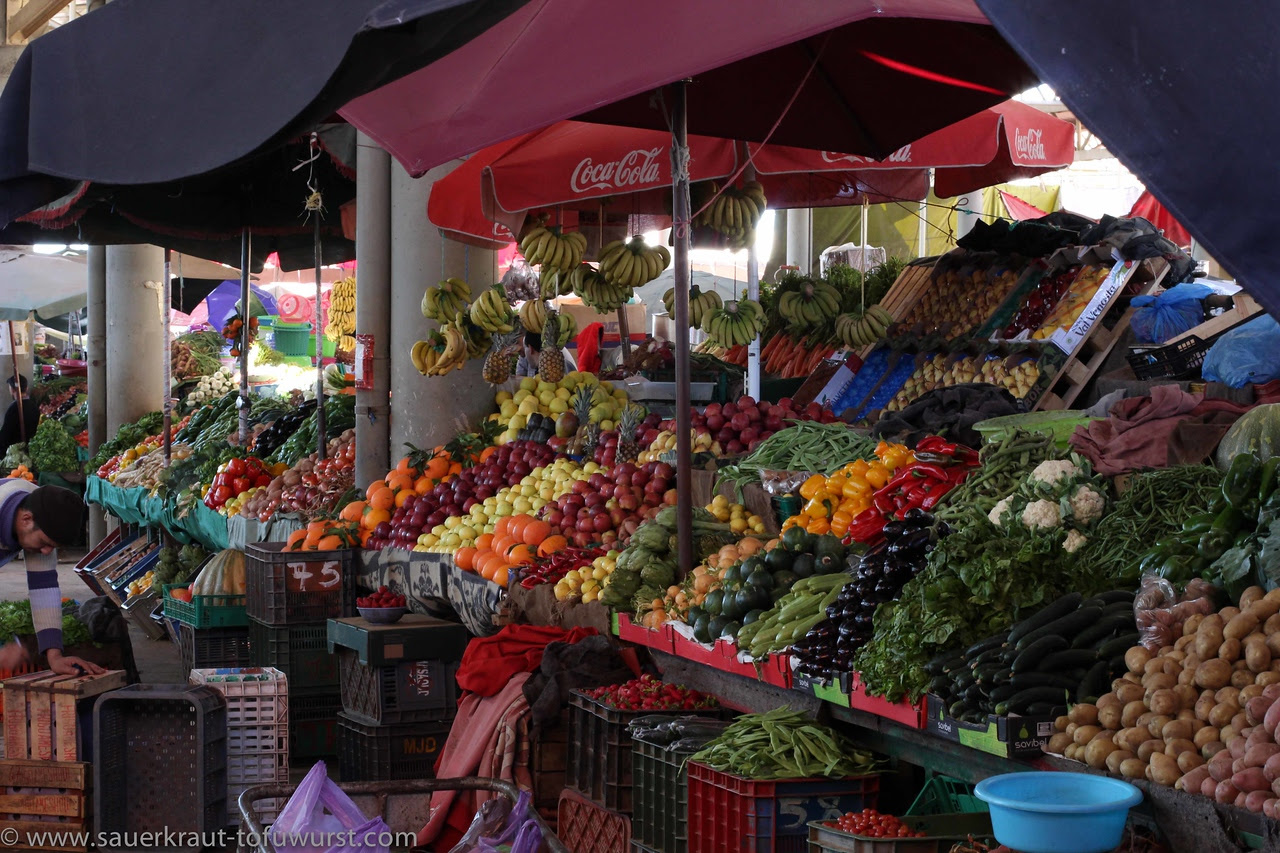 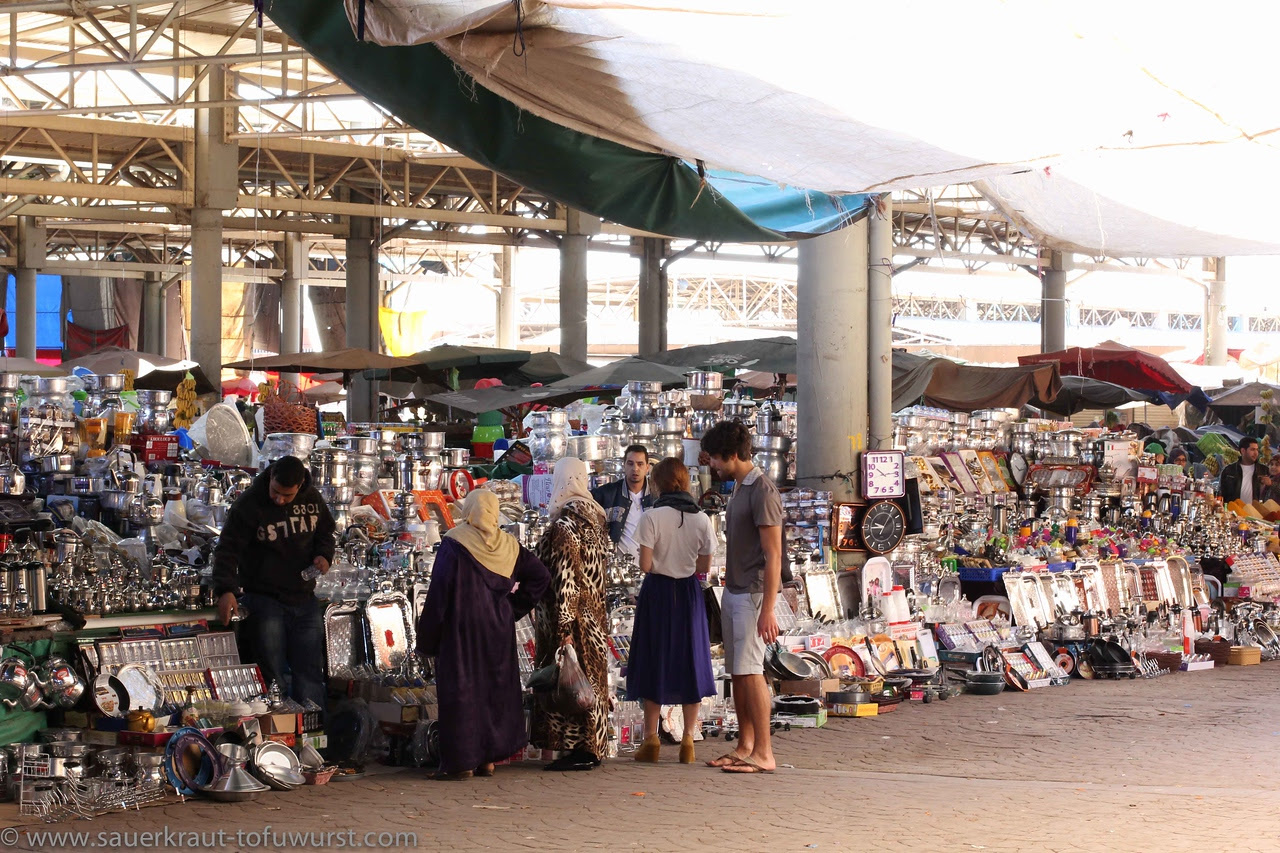 What about the shock? Well, this part of the story went like following: After calling and emailing and visiting DHL, providing all sorts of info my shock arrived to Agadir on Wednesday. I had to pay some customs and an enormous amount to DHL for some fees. This shock is becoming soon the single most expensive item on my bike. So Thursday was the day to swap the shocks again. I did not fully trust this setup now. The shock did not come as I instructed and I needed to change the position of the upper and lower mounting bolts in order to fit the shock into its position without breaking anything else.
Our apartment was rather dark (most likely excellent for a hot summer) and I got really depressed about being there all the time. Anyway it was time to get out and what would be better then to make a test ride with the repaired shock. I wanted to visit the Immouzer cascades and this would be a decent 150 - 200 km ride. Small streets, some off-road that would be test enough and so I started in a good mood. After some 25 km I had a small stop to admire the beautiful valley and scenery only to discover the small oil spot under my bike. WTF - oh no, the shock was leaking ... AGAIN. I though to myself this cannot be true, this shock must be cursed.

I went back to the hotel - totally depressed. Skippy saw my face when I came into the room and there was no needs for any words. She knew what happened. This called for some comfort food and a nice cup of coffee. For the second time on this day, I swapped the shocks and put the basic-spare back. On Friday, I went to Agadir to do the shopping and searched for this one motorbike shop, which I found from the HUBB.

The shop owner was not there but he was supposed to call me later to tell whether it can be fixed by tomorrow (oh yeah, we had enough of the place and needed to get back on the road again!) and how much it would cost. I learned already that people do not call and so I went after my shopping back to the shop. The owner told me that he will check and call me by 5pm. Of course nothing happened so I called him a bit later and he told me that he cannot fix it. Ok, I thought for myself, it would have been nice...

This door business was something we did not understand. The front door got locked in the evening around 9pm. Anyone wanting to move in or out was required to call the night guard. The guard might appear within 5minutes to open the door. And what if there is a fire or the night guard is gone?

Next morning we went to the vet to remove the stitches from Hertta. Skippy was a little shocked about the way how he did it (using scalpel knife towards the skin!!!), anyway it went ok and Hertta was much better now. She just needed to continue the vitamin K-shots for few more days and finally got drops for her eyes, which couldn't be treated same time with the antibiotics. Then we went to the bike shop to get my broken shock back.
Surprise, the repair shop folks started to fix it. I was really happy. It certainly was a western European price not Moroccan one! We went back to the hotel with Hertta and I returned to the shop later to pick-up my shock. It was impossible with my poor French to figure out what exactly was broken, anyway it was not the connection pipe to the oil reservoir as I thought originally. So, I changed the shock at the bike shop and we needed to adjust the symmetry a little bit to fit the shock in perfectly. Voila (and if you think this story really ends here... just wait :D ).

I rode back to the hotel with a little detour to see that this repaired repaired shock is now ok. It looked all fine. I wanted to put my bike into the garage only to realize that the owner changed the key lock of the gate. Good one! One more night, I had enough and did not really care anymore. I just wanted to get out of here. Next morning we rode towards south and for the first time in Morocco without a booking for the next night.

And about our driving licenses, they did not come by the time we left. So this story is to be continued as well...

We also made a travelogue from Aourir. Enjoy!

Click here to watch the video (full HD will come once we get a fast internet connection).